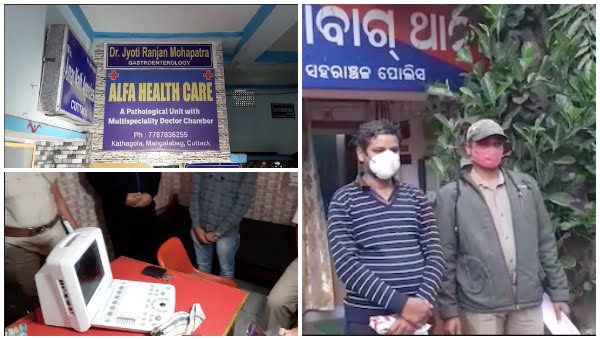 Cuttack: One more person was arrested on Sunday in connection with the alleged pre-natal sex determination tests in Odisha’s Cuttack city.

Police had earlier arrested four persons and seized several equipment and machines used for carrying out such tests following a raid on Alfa Healthcare Clinic here on January 18.

The fifth accused, identified as Manas Ranjan Panda, had supplied the ultrasonography machine to the clinic that was running without registration for the last six months at Kathagola Sahi.

While its owner Prasanna Kumar Sahoo (38) was caught red-handed while carrying out the test, his assistant Basant Kumar Bardhan (20) was also arrested and the clinic was sealed in presence of ADMO&PH Dr Mamata Mohapatra following the raid.

The accused – Santosh Kumar Lenka alias Pintu(34) of Poparada in Tangi is the proprietor of Prime Diagnostic at Kathagola Road and Hrusikesh Sahoo alias Tutu (43) of Bari Daragha in Jajpur is the owner of Jay Jagannath medicine store located in Metro Manorama complex at Malha Sahi.

“Manas had procured the machine from Ranchi. He had been supplying medical equipment for the last 10 years and had sold the ultrasound machine to Prasanna at Rs 3.5 lakh,” said Mangalabag police station IIC Amitav Mohapatra.

Police had earlier informed that Prasanna had engaged 22 more brokers in the 10 neighbouring districts for bringing pregnant women to his clinic for sex determination tests. A Plus II pass-out, he used to conduct 15 to 20 such tests a day and charge Rs 5,000.

Controversy: Will The Movie ‘Why I Killed Gandhi’ Be Banned?

Barabati T20I To Be Played In Front Of Capacity Crowd: Report