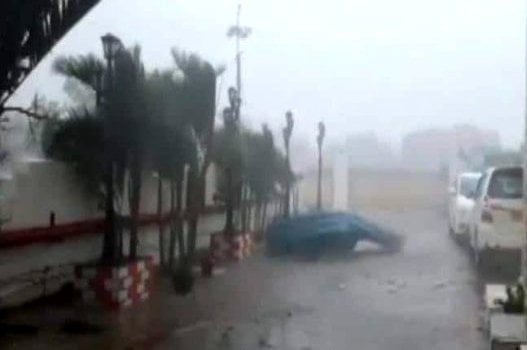 Bhubaneswar: Most parts of North Odisha districts received heavy to very heavy rainfall in the last 24 hours under the influence of very severe cyclonic storm Yaas.

As informed by the senior scientists of the Meteorological Centre, Bhubaneswar Uma Shankar Das, the rainfall recorded in the last 24 hours till 8.30 am on Wednesday was highest in Kusumi block in Mayurbhanj district with 304 mm followed by 288.3 mm in Chandbali in Bhadrak, 275 mm in Rajnagar in Kendrapada, 271 mm in Erasama and 200.3 mm in Paradip in Jagatsinghpur district.

Briefing the media earlier in the day, Special Relief Commissioner (SRC) Pradeep Jena said the duration of landfall of the cyclonic storm will continue for 3-4 hours and end by 1 pm.

Stating that the wind speed in Balasore district is now 130-140 kmph, he said it will take approximately 5-6 hours for the cyclonic storm to cross the district. However, the strong wind is expected to continue in Balasore and Bhadrak districts till 3 pm, he added.

Jena further said the cyclonic storm after crossing Balasore district will head towards Mayurbhanj district where heavy rainfall accompanied by a wind speed of about 100 kmph will begin from the afternoon. The storm will later cross Mayurbhanj today midnight and enter neighbouring Jharkhand, he pointed out.