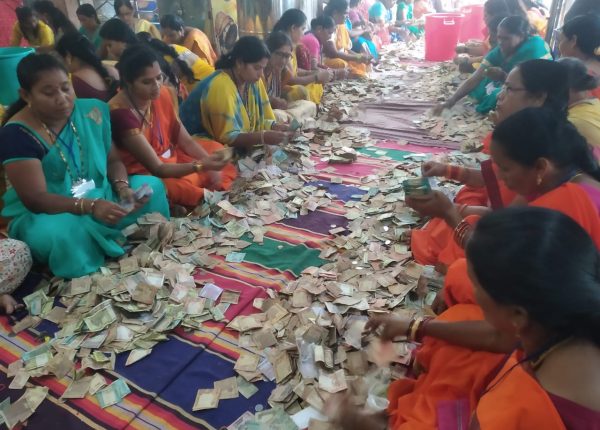 Rayagada: The process of counting the cash, donated by devotees in the ‘Hundi’ (donation box) of Maa Majhighariani temple in Odisha’s Raygada district started on Wednesday.

The members of the temple’s board of trustees in presence of the officials of Endowment department and police opened the donation box at 8 am. The members of Venkateswar Kalyan Mandir and Gems Tutorial in the town have been engaged to count the currency notes donated by the devotees in the ‘Hundi’.

Radhakrishna Dalei, a member of the trustee board, said, “The contributions of the devotees in the donation box are counted three times in a year. Last time, it was opened in March this year.”

Besides cash, the devotees donate gold silver in the ‘Hundi’. Last time, the cash donation was counted as Rs 78,88,000 while gold ornaments weighing 54 gm and silver 2.6 kg were donated in the donation box, Dalei added.

Considering the huge amount of cash, the counting on the temple premises is expected to go on till late night. It will not be stopped until all donations are counted. So far, foreign currencies like US dollar and African currencies have been found from the donation box, , Dalei said.

Large number of devotees from Rayagada and its surrounding areas besides those from Andhra Pradesh and Jharkhand donate to the temple. Maa Majhighariani is considered as the presiding deity of Rayagada.

Software Engineer’s Death In Odisha: Know What Bhubaneswar DCP Has To Say