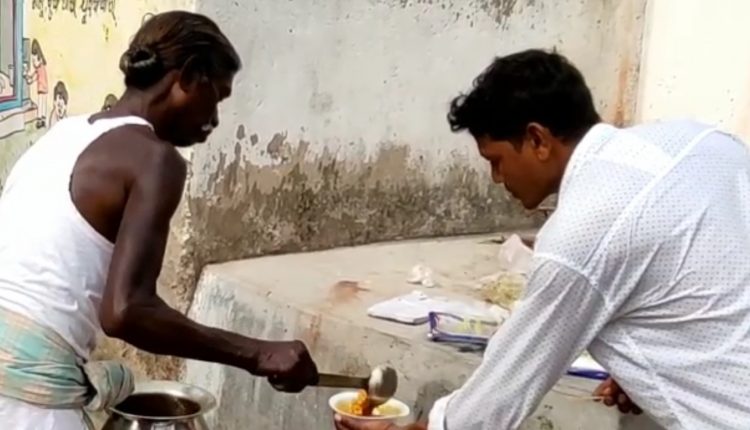 Bargarh: On the popular demand on the occasion of Rath Yatra on Friday, Odisha’s eminent Koshali poet Haladhar Nag opened his shop to sell ‘Ghughuni’ (white pea curry) in his village in Bargarh district.

Nag, who has been conferred with Padma Shri, cooked ‘Ghughuni’ and served it in Sal leaf bowls from his shop in Ghens village. The local villagers as well as people from outside thronged the small shop to have the curry, which is locally called ‘Ragchana’, on the spot or carry some home to have with their families.

“Nag’s Ragchana has been in high demand for its excellent taste. It is not for first time he is selling the item. He is famous in the area for his preparation since long,” said Bikramditya Pradhan, a villager.

“We were looking forward to Rath Yatra when Nag makes it a point to sell the curry. We had also requested him in this regard. Despite his busy engagement in several social works, he prepared Ragchana for his love and affection towards us,” said another customer.

Nag, popularly known as ‘Lok Kabi Ratna’, said there is nothing to be surprised about selling Ragchana. “It is my source of living. Earlier also, I was selling different items like biscuits, pens, paper, notebooks, chocolates besides white pea curry from my shop. But this Ragchana has been highly demanded.”

Since people love to have Ragchana as part of celebration of Rath Yatra and expect him to prepare it, he is selling to earn something, he said.

He further said he does not spend a single paise from Rs 10,000 monthly allowance he receives from the state government. “The entire amount goes towards maintenance of orphanage. It is not enough to meet basic needs of 100 children staying in the orphanage,  but it is some help for them. Besides, I am constructing a temple near Ghens and contributing there also,” he said.

Nag was honoured with Padma Shri in 2016. Born to a poor family, he is known for his work Kavyanjali, an anthology of English translation of Nag’s selected poetry in Koshali, the dialect of western Odisha. He released his third volume of Kavyanjali recently.

Nag was awarded Doctorate Degree by Sambalpur University in 2019. Dinesh Kumar Mali has translated his poems in Hindi.