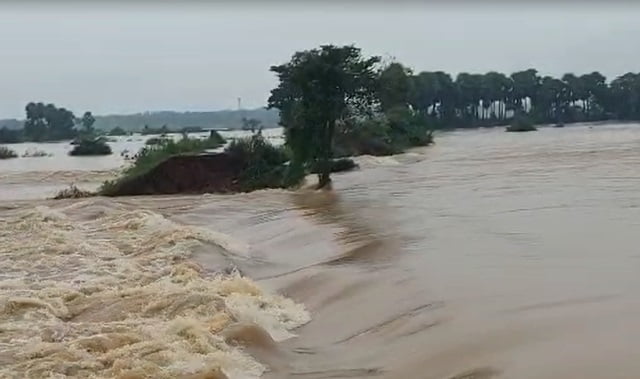 Balasore: The flood situation in Balasore district on Wednesday turned grave as Jalaka river was flowing nearly two metre above the danger level due to heavy rainfall in the upper catchment area.

As per the latest information, the water level of the river at Mathani was 7.18 metre against the danger level of 5.5 metre. The district administration assigned the rise in water level to opening of the sluice gate of Jamburai Canal in Mayurbhanj district.

After excess water was released in Jamburai canal, the floodwater entered several villages in Suliapada, Morada, Chitrada and Rasagobindpur panchayats of Mayurbhanj district on Wednesday following a 500-metre breach in the embankment at Ekatali village in Raghavpur panchayat under Rasagobindpur block.

The floodwater has caused widespread damage in Balasore also. While thousands of acres of paddy crop have been submerged, road communication between Basta and Baliapal in the district has been snapped as water at a height of 4-5 feet was flowing on the roads.

The premises of the court, police station and SDPO office have been inundated while the road connecting the National Highway has been submerged under three feet of water in the block. Besides, power supply has been cut off since early morning as the floodwater entered the power grid.

With the possibility of heavy rainfall in the coastal districts for a week from September 25 due to the formation of a low pressure area over the Bay of Bengal, the district administration has started evacuating the people from the low-lying areas and made arrangements for their stay at nearby cyclone shelters and schools with food and health care facilities.

Meanwhile, district collector K Sudarshan Chakravarthay visited the low-lying areas of Basta and Sadar blocks in the morning and supervised rescue and relief works. He also took stock of the river embankment.

As the embankment at Melaka village in Basta is most likely to breach under the pressure of floodwater, the Water Resources Department has packed it with sandbags.

Apart from Jalaka river, flood in Subarnarekha river in the district also looms large. By 3 pm, the water level of Subarnarekha was flowing at a height of 9.91 metre at Rajghat against the danger level of 9.45 metre. As a result, the floodwater has entered 10 villages in five panchayats.