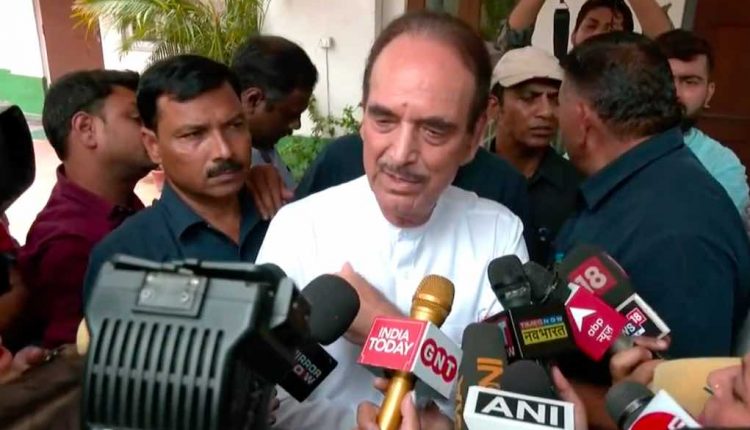 New Delhi: Three days after resigning from Congress, Ghulam Nabi Azad on Monday launched a scathing attack on the grand old party and alleged that he was ‘forced’ to quit after being ‘pushed to the brink’.

“When a sensible person feels that he is not wanted anymore then he should leave the house. Prime Minister Narendra Modi always wished for Congress Mukt Bharat and these people have themselves fulfilled that for him,” the veteran politician told mediapersons.

“This all happened because the leadership in the past eight years has tried to foist a non-serious individual at the helm of the party,” he alleged without taking the name of Rahul Gandhi.

Responding to ‘DNA Modi-fied’ remarks from Congress leaders, the former Jammu and Kashmir Chief Minister said that PM Modi is only an excuse, and it was Rahul who hugged the Prime Minister in Parliament. “The issue began when the Congress’ G23 leader wrote a letter to the high command and the party had a problem as no one wants to be questioned. The Congress does not respect its leaders and people don’t know about our contribution to the party,” he said.

In his 5-page resignation letter addressed to Congress chief Sonia Gandhi, he wrote, “All the senior and experienced leaders were sidelined as a new coterie of inexperienced sycophants started running the affairs of the party.”

Explaining why PM teared up in Parliament during a farewell speech when Azad’s Rajya Sabha tenure ended last year, he said Modi was talking about an incident. “I had understood Modi was a crude man as he is not married, does not have children. I thought he won’t care. But, at least, he showed humanity when he spoke in Parliament about the incident that happened with the Gujarati tourists when I was the Chief Minister.”

#WATCH | “I thought PM Modi to be a crude man but he showed humanity,” says Ghulam Nabi Azad pic.twitter.com/LhVHopvdhe

Here, he was referring to the attack on May 25, 2006, in Srinagar, in which four tourists were killed and six were injured.

“Some tourists from Gujarat had died in a grenade attack in Kashmir. Modi saheb, who was chief minister of Gujarat, called my office. But I was choked up and could not speak with him. He heard me crying as my staff brought the phone close to me,” he recounted.

Azad said that Modi kept calling his office for updates. “Later, I started weeping again while seeing off the two planes carrying the bodies and those injured as families of the victims were howling in grief. He probably saw me in tears on TV. He called but, again, I could not speak,” he added.

He ruled out joining the BJP and confirmed launching his own party in Jammu and Kashmir in an interview with NDTV.

Jio To Launch 5G By Diwali; Now Shop From JioMart On WhatsApp