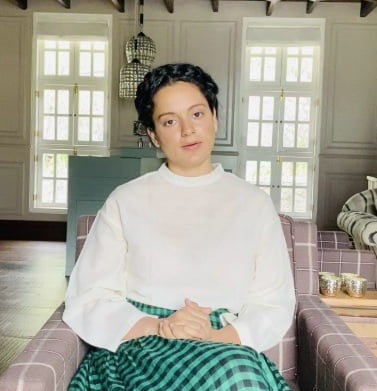 Actor Kangana Ranaut, who has taken up the cudgels to prove that Sushant Singh Rajput’s death was ‘murder’ not ‘suicide’, has now vowed to return her Padma Shri if she is unable to prove her claim.

She told Republic TV that she was summoned by the police in the case.

“They (Mumbai Police) summoned me, and I asked them too, that I’m in Manali, that you can send somebody to take my statement, but I have not received anything after that. I am telling you, if I have said anything, which I can’t testify, which I can’t prove, and which is not in public domain, I will return my Padma Shri,” Kangana said. “I don’t deserve it. I am not that person who will go on record (to make such statements), and everything that I have said is in public domain,” she added.

Kangana had posted some videos post-Sushant’s death in which she talked about the pressure and rejection he was facing from Bollywood and the media. She blasted blind items written about him in the media and called his death a ‘murder’, planned by the ‘movie mafia’, Hindustan Times reported.

The ‘Queen’ actor also quoted Sushant’s father, his ex-girlfriend Ankita Lokhande and filmmaker Abhishek Kapoor and even read out a few blind items published about Sushant by the media. She said that she never said anything when the media targeted her but confronted a journalist after they spoke ‘against freedom fighter’, referring to Rani Laxmi Bai, Hindustan Times wrote.

on an individual happens openly and we all are all guilty of watching it silently. Is blaming the system enough? Will there ever be change? Are we going to see a monumental shift in the narrative on how outsiders are treated?