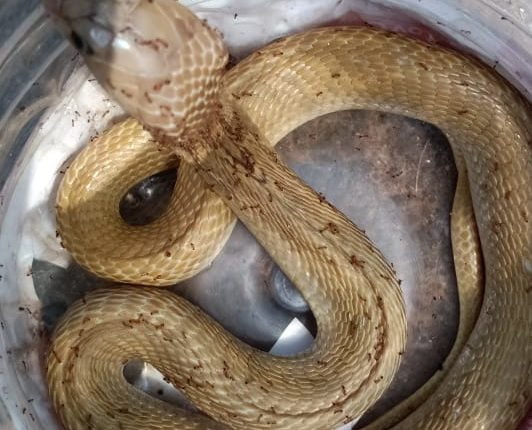 Puri: A three feet long king cobra was rescued from the road side at Malatipatapur in Puri district on Friday.

According to reports, a passer-by named Niranjan Roul first heard the snake hissing from a plastic jar kept under a Kaner tree on the road divider. He also saw ants attacking the snake inside the jar.

Soon, a Snake Helpline member, Nihar Ranjan Panda, came to the spot and took the cobra out of the jar. He also sprayed cold water on the snake’s body to separate the ants. Then. he released the cobra in nearby farmland.

Snake Helpline General Secretary Suvendu Mallick said someone must have kept the cobra in the jar with a wrong intention.

The matter should be investigated, he added.

[Watch]: Unconscious Cobra Given Oxygen, Gets New Lease of…