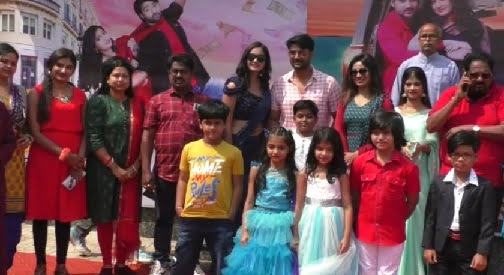 Baripada: After two-year hiatus due to COVID pandemic, two producers and a director of Mayurbhanj district are coming up with two Odia films.

The mahurat of the films, ‘Love Garage’ and ‘Prema For Sale’, was performed in presence of the entire cast and crew at Harihara temple in Baripada on Friday.

To be produced under Om Productions, both films will be directed by Sanjib Dwivedi. The shooting of the films to be started soon will be mostly done in Mayurbhanj, Keonjhar and Balasore districts, he said.

While actor Sambit will play the lead role in the two movies of romance genre, he will be paired with actresses Ria and Manish in ‘Love Garage’ and Bhumika in ‘Prema For Sale’.

Director Sanjib said he would take up direction of both films after remaining out of action for two years due to COVID pandemic. Based on romance oriented storyline, the films are being made with a target on young audience, he added.

Stating that content drives any film, actor Sambit said both ‘Love Garage’ and ‘Prema For Sale’ have a strong content. “with different musicians, the songs are expected to come up well and would be appreciated by film lovers of Odisha. In fact, music is the USP of both films,’ he added.

The producers of the films, Subhalaksmi Patnaik and Umesh Patnaik said they wanted to wrap up post-production work fast to release the movies in April.