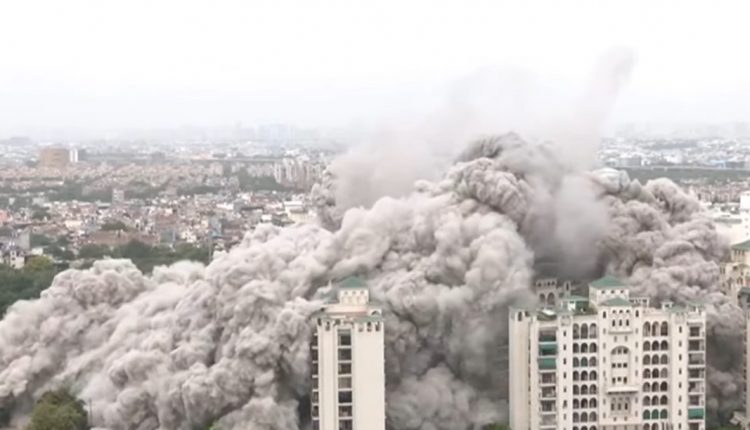 Noida: The Supertech Twin Towers in Noida, taller than Delhi’s Qutub Minar, were demolished on Sunday in a nine-second procedure following a directive from the Supreme Court.

The towers rigged with more than 3,700-kg explosives were brought down by a technique called ‘waterfall implosion’ without causing any structural damage to nearby buildings. The project was located off the expressway that connects the twin cities of Noida and Greater Noida.

“Broadly, there was no damage to nearby housing societies. Only some bit of debris has come towards the road. We will get a better idea of the situation in an hour,” Noida CEO Ritu Maheshwari told ANI.

The CEO further said that cleaning was being done, gas and electricity supply would be restored in the area while people will be allowed to enter the neighbouring societies after 6.30 pm.

In 2021, the apex court ordered the demolition of the Twin Towers since these were constructed illegally. While the building plan showed 14 towers and nine floors, it was later revised to 15 buildings and 11 storeys. The builder was allowed to construct two more towers – Ceyane and Apex – with 40 floors each on the ‘green’ area, which was the heart of the fiasco, The Print reported.

The residents of Supertech Emerald Court society moved Allahabad High Court in 2012 stating that the construction was illegal. As the high court agreed to the demands of the Emerald Court’s residents and ordered the demolition of the Noida Twin Towers two years later, Supertech appealed against the verdict in the SC.

The safety of Emerald Court’s residents also found mention in the hearings.