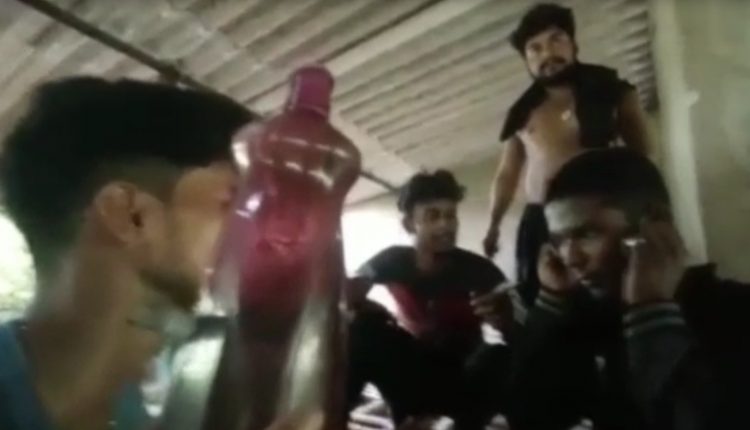 Malkangiri: After KBN gang in Bhubaneswar and ‘Public Sandha’ and ‘Amania Bagha’ in Cuttack, another video of a group of youths smoking ganja and beating up a boy has surfaced in Malkangiri.

The video, which has gone viral in social media, shows 5-6 youths gathering at a deserted and dilapidated building. They are also seen smoking ganja in cigarettes for some time.

After some time, they are found scolding a young man, who is seen encircled by them, in foul language and beating him up mercilessly with bare hands, cricket stumps, sticks and other weapons. What the victim is saying is not audible.

When contacted, SDPO Abhilash said the police have taken note of the video and investigation is on to identify the youths. The youths are suspected to have fled to Nabarangpur and from there to Andhra Pradesh, he said adding that a search operation is on to trace them.

It may be noted that Malgodown police in Cuttack on Thursday had picked six persons, including a girl, for questioning after a video showing youths holding weapons and mouthing foul language went viral.

While the video was uploaded on Instagram under the name ‘Public Sandha’, another video with the name ‘Amania Bagha’ also came into circulation.

In Bhubaneswar, ‘Koi Bhai Nahin’ (KBN) gang hogged the crime spotlight after its video of over two dozen members brandishing sharp weapons and a gun, driving an SUV and dancing on the middle of the roads went viral.

Diabetics With COVID Likely To Have Fatigue Complications: Study

Huge Amount Of Explosives Of Maoists Seized In Odisha’s Malkangiri