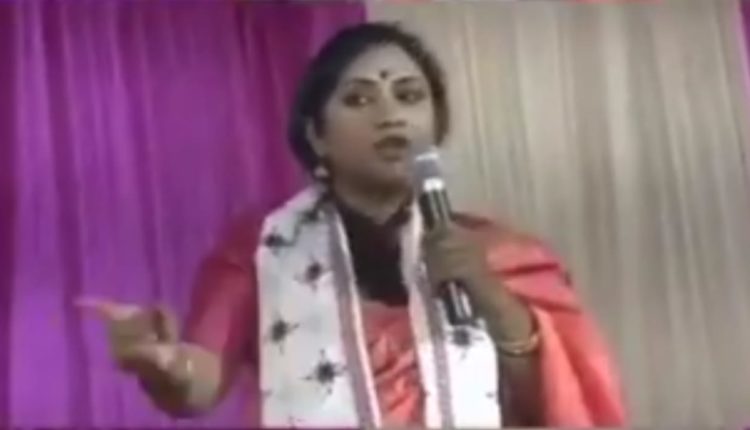 Bhubaneswar: BJP state general secretary Lekhashree Samantasinghar has stirred up a hornet’s net with her statement that the country got to know about Pilgrim Town Puri only after Sambit Patra contested the Lok Sabha polls from the constituency.

“People used to think that Puri is in Kolkata but they came to know about the town being in Odisha only after Sambit Patra contested the polls,” she told party workers at an event here.

Leaders across party lines took exception to this statement of her’s after a video clip of the event went viral on social media.

Expressing displeasure, party colleague Pradip Purohit said that her statement is hilarious. “Puri Jagannath Temple is famous across the globe but not for Sambit Patra,” he added.

BJD MP Amar Patnaik tweeted, “First, BJP Vice-President Baijayant Panda compared Odisha with Pakistan and now Samantasinghar is giving such statement. It is an insult to Odisha and the land of Jagannath, the Lord of the Universe. Even a 3-year-old child knows where Puri is, the humble abode of Lord Jagannath. Make no mistake, He is the lord of Kolkata as well.”

Khandapada MLA Soumya Ranjan Patnaik advised Lekhashree to refrain from making such statements. “Whenever people outside the state used to ask me where is Odisha, I used to tell them about Puri and people would easily understand and recognise,” he said.

Senior Congress MLA Suresh Routray blasted the BJP leader and asked whether she had lost her mind. “Lord Jagannath is Himalaya and Sambit Patra is not even a speck of dirt before Him. Why is she even comparing?” he questioned.

Another Congress leader Santosh Singh Saluja said that Odisha is synonymous with Puri. He demanded an apology from Lekhashree.

The BJP leader later told media that she has been quoted out of context and people should hear her entire speech instead of creating a controversy over one line.

To which, Puri MP Pinaki Mishra, who defeated Sambit Patra in the Lok Sabha elections, tweeted, “Outrageous statement sought to be justified, instead of a humble apology! Puri & the Lord’s abode has been the pride of Odisha from times immemorial and will remain so long after the arrogance of some has been swept away into the Bay of Bengal!”