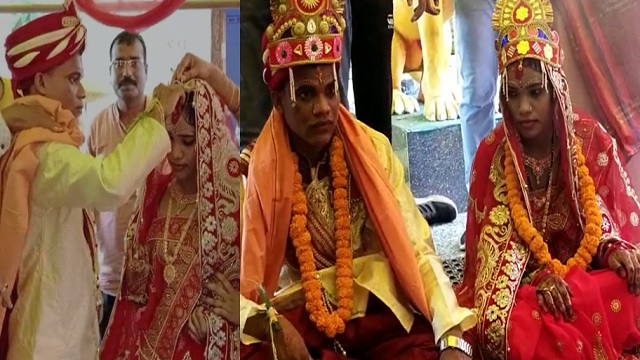 Nuapada: In a unique gesture, Odisha police conducted the ‘Kanyadan’ ritual when a Maoist couple tied the knot on Wednesday. The surrendered Maoist couple have been identified as Rahul Musaki and Dalmati Kamar.

According to sources, Rahul, alias Pintu of Sukma in Chhattisgarh, had joined the Maoists in 2016 and worked in the Kandhamal-Kalahandi-Boudh-Nayagarh division. He surrendered before Kandhamal police in September 2021. Similarly, Dalmati of Kundenjharia village in Nuapada was working in the Mainpur-Nuapada Maoist Division and surrendered in 2018.

Giving up violence, they joined the mainstream and later decided to get married as per Vedic rituals on the premises of Nuapada Reserve Police.

Police were in touch with them since they had been rehabilitated under the government surrender and rehabilitation policy.

Although the parents of both the bride and groom were present during the wedding function, the inspector-in-charge of Jonk police station Kailash Sethi acted as the bride’s father while sub-divisional police officer (SDPO) Prasant Patnaik was the groom’s father.

Sethi said he was delighted with the honour. “We are very happy to be a part of the former Maoist couple’s wedding. All the officials of the police station and police outpost attended the wedding. We expect them to lead a life of an ideal couple. We hope this will set an example for other Maoists to join the mainstream soon and we will accept them with a warm welcome.”

It is pertinent to mention that so far, 14 marriages have been solemnised by the police in different Maoist-dominated districts, mostly Koraput and Malkangiri.