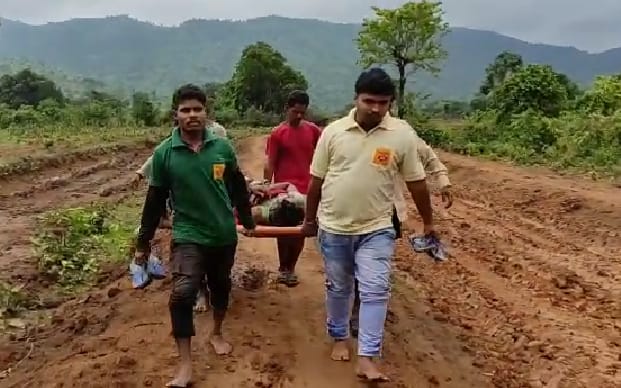 Malkangiri: A patient in need of emergency care had to be taken 3 km on a stretcher to an ambulance before being shifted to an hospital.

The incident took place in Swabhiman Anchal area in Odisha’s Malkangiri district where a diarrhoea patient Ganesh Pangi of Kuniguda village was carried to the ambulance waiting to shift him to a hospital in Chitrakonda.

Pangi was severely affected with diarrhoea and vomiting for the last several days but could not be shifted to Chitrakonda hospital, which is around 12 to 15 km away, as the ambulance failed to reach his village. The roads in the area from Kuniguda village are virtually non-existent, say locals. The existing road was interspersed with mud and ditches.

The 108 ambulance driver tried his best to wade through the mud, but could not and parked the vehicle three km away from the village.

Poor road connectivity has turned out to be a curse for patients in this part of Malkangiri even after the Gurupriya bridge was commissioned by the state government with an aim to provide connectivity and better facilities to the locals who have been living in the fear of Maoists.

Villagers said poor road connectivity has become a curse for them as most people die even before availing medical help in time. The y blamed the unholy nexus between government officials and contractors for their plight.

Heavy Rain: Communication To 10 Villages Cut Off For Bridge Collapse In…