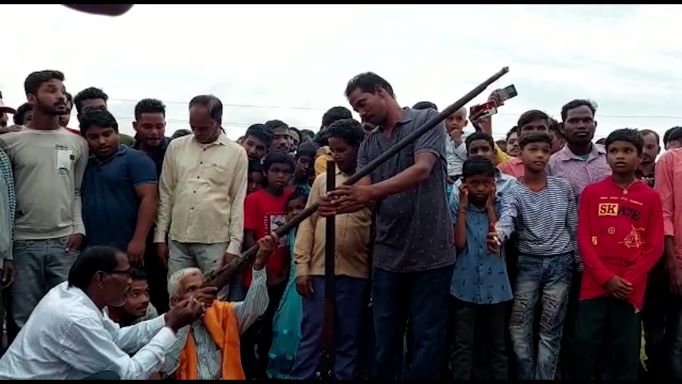 Rayagada: The annual event of ‘Lakhamara’ (target practice) under royal patronage was organised at Kasipur in Odisha’s Rayagada district on Thursday.

The tradition of ‘Lakhamara’ was started by the kings of Naga dynasty, who ruled over the kingdom including present Rayagada district, to promote target practice among the tribals, who were highly skilled in using bows and arrows, to fight against the enemies of the state, particularly the Britishers.

The Naga kings used to organise the competition after performing puja for the presiding deity Maa Manikeswari during Dussehra festival. The tribals, who comprise majority population of the district, used to participate in the sport held on the day after Dasami of Navratri.

In order to keep the tradition alive, the present Naga king Dibyendu Kumar Deb organised the sport on Thursday. He went in a procession with the tribals playing the traditional musical instruments, holding a saffron colour flag and armed with traditional weapons.

As per the rules of the competition, a cucumber, which is offered in Durga puja, is tied to the highest branch of the tallest tree in the area. The participants used to shoot arrows from their bows aiming at the cucumber. Over the years, they were given a rifle to shoot at the target. There is no restriction for anybody to participate in the competition.

This year also, several tribals from young to old participated in the game with enthusiasm. They were given a long barelled gun claimed to be 200 years old and told to shoot at the cucumber after loading the cartridge.

The person, who first succeeded in hitting the target, was declared the winner. The king felicitated the winner by putting a turban of ‘Pata’ cloth on his head. This year, Naba Prasad Mishra emerged victorious in the competition and king Dibyendu Kumar Deb honoured him with new clothes.