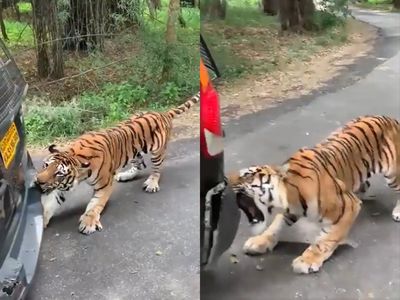 Don’t underestimate the strength of a Royal Bengal Tiger! That’s the message a big cat seems to be giving as seen in a widely circulated video on social media.

In the 90-second video, the tiger is trying to pull a vehicle full of tourists from the backside with such force that the car’s bumper gets damaged.

When someone from another car tries to shoo away the tiger, it uses paws to scratch the vehicle. The tiger, however, is unperturbed.

The video, shared by Twitter user @MonaPatelT, is said to be shot in Bannerghatta National Park, near Bengaluru.