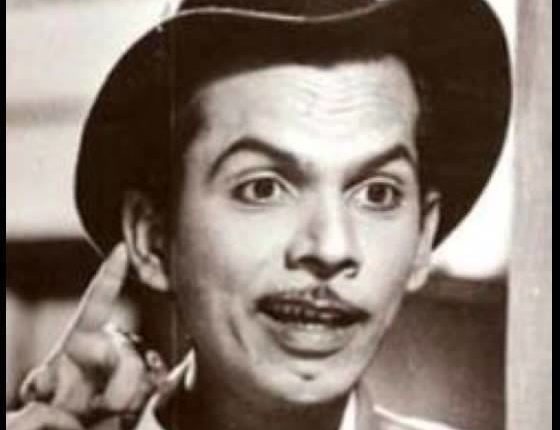 No one can reprise the antics of a drunkard as well as Johnny Walker used to do. One of the earliest and best-loved comedians of Indian cinema, Johnny Walker brought smiles and amusement to all in his films. Today is the birth anniversary of the actor who is best known for his roles in popular films such as Mere Mehboob, CID, Pyaasa and Chori Chori. He made his acting debut with Guru Dutt’s Baazi in 1951 and continued to feature in popular films through the next two decades.

He had christened himself after the famous Scotch whisky, Walker and would drive audiences wild with laughter with his squeaky voice, pencil-thin moustache and his now-classic drunken antics. Everyone loved his iconic image of the hero’s comic and often drunk sidekick, who would cause comedy to occur in the film. His real life was a dark contrast. He was among the most sober men and also a strict teetotaller.

Born as Badruddin Jamaluddin Kazi in Indore, Madhya Pradesh, he was working as a BEST bus conductor when actor Balraj Sahni noticed some of his antics during a ride. Balraj decided to introduce him to filmmaker-actor Guru Dutt.

In a Rediff.com article in 2003, author Dinesh Raheja wrote, “Balraj suggested that Badruddin try his luck with Guru Dutt. Badruddin dropped in on the sets and behaved like a drunken gatecrasher. A visibly impressed Guru Dutt instantly signed him on for a bit role in Baazi and rechristened him, Johnny Walker, after the popular whisky brand. He has given some of the best comic scenes as a drunkard but Johnny was a teetotaller throughout his life.”

According to an article in The Print, the filmmaker was in a serious discussion with actor Dev Anand over their film Baazi (1951), when Badruddin turned up on the set as a ‘drunkard’ and kept tripping on things, causing confusion and laughter. Soon, he straightened up revealing he was only acting. “Guru Dutt was fascinated and the episode bagged Badruddin his first break with Baazi.”

His popularity reached such heights that he got his own film, Johnny Walker (1957)! He was also hired by other directors to act in their own films, the most notable of these being B.R. Chopra’s Naya Daur (1957), Bimal Roys’s Madhumati (1958) (the latter for which he won his first Filmfare Award), and K. Asif’s Mughal-E-Azam (1960).

He slowly began to fade out in the 1960s, as Mehmood took over as the new king of comedy. He kept working in films, though, most notably in Shikar (1968), for which he won his second and final Filmfare Award; and in Anand (1971), where he was unusually seen in a serious role and even more unusually excelled in it, showing the remarkable talent he still held, writes IMDbTrailers.

He was last seen on the silver screen in Kamal Haasan’s Chachi 420 in 1997. He played Kamal’s friend and makeup artist in the film. Johnny died in 2003 after a prolonged illness at his Mumbai residence at the age of 79.