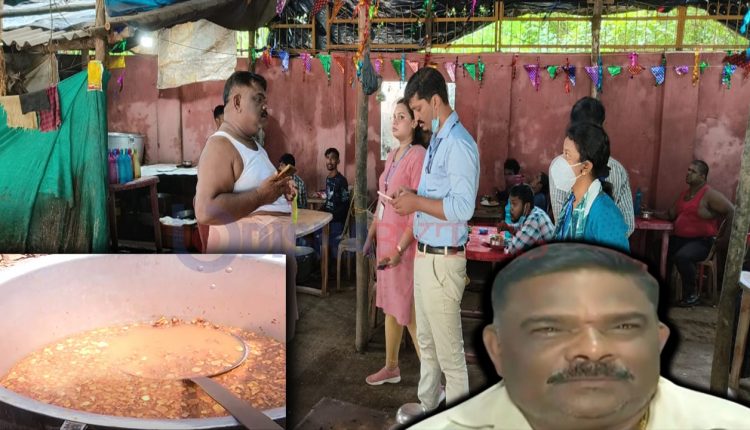 Bhubaneswar: Popular ‘Kishore Bhaina Mutton’ hotel, which made its way to many food bloggers’ lists and earned fame for its delectable mutton curry, was sealed and its food registration cancelled by Bhubaneswar Municipal Corporation (BMC). It was also penalised for poor sanitation.

According to sources, BMC officials inspected the area as part of its sanitation drive and found that all standard guidelines for food safety were being breached.  The hotel was reportedly serving stale crabs besides using expired sauces and harmful food colours. The food was also being prepared in extremely unhygienic conditions.

However, the hotel was found open on Thursday with its staff engaged in preparations for the day. Refuting the reports, the owner of the hotel Kishore Chandra Sahoo said that BMC officials had visited his hotel since his food licence was to be renewed. “The licence I have is 15 years old and I was told that it is not meant for hosting such a big crowd,” he said adding that he was aware of this rule.

Sources further said that the owner was running a full-fledged hotel business while he had a licence for vending street food like ‘gupchup’ and ‘dahi bara’ and was paying only Rs 100 tax towards it.

Sahoo also dismissed reports about using sauces in the food served in the hotel and the penalty imposed for poor sanitation. “It is a roadside stall and we are trying to maintain as much as hygiene as possible. The hotel next to mine was fine Rs 1000,” he said.

On allegation about the low quality of food, he added that the joint would not have gained popularity if that was the case.

Health and Food Sanitation Officer Dr Dipak Kumar Bisoi, however, said that the hotel was registered but did not have a licence. “We inspected Kishore Bhaina hotel on Wednesday and he has violated few rules in terms of food safety and the sanitation practice was also very poor. Therefore, the registration was cancelled,” said Bisoi.

The officer further said that Kishore can avail of the licence only after he becomes the land owner under the Food Safety Act since he has deposited electricity bills.

Responding to reports that the hotel has been reopened, Bisyoi said that it is illegal and action will be taken against him if he does not comply with the rules.

Male Nudity In Films, Vulgar Or Aesthetic? Who Has Dared It In Bollywood?