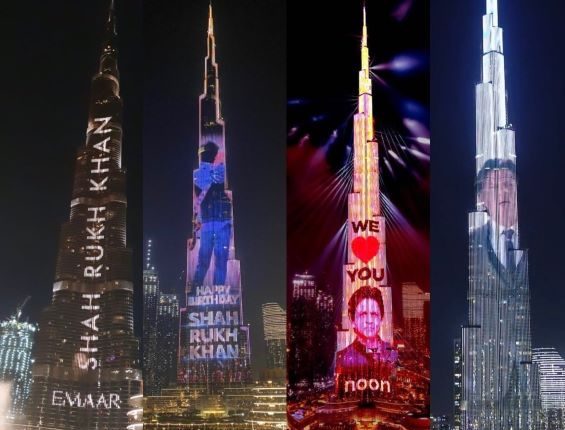 It was a promotional video, featuring Shah Rukh, which lit up the iconic skyscraper on Wednesday.

The Bollywood superstar, the face of Burjeel Holdings, launched an integrated brand campaign by one of the largest healthcare service providers in the UAE that owns 39 hospitals and medical centres.

In the 1-minute, 10-second video, Shah Rukh narrates the story of the healthcare group.

Some netizens pointed out it was the fourth time that SRK has appeared on Burj Khalifa, including on his previous two birthdays – on November 2 in 2020 and 2021.

The musical fountain at Burj Khalifa played tunes from Shah Rukh’s ‘Om Shanti Om’ before lighting up the screens with the actor’s ad.

As fans started posting the video of their favourite superstar on Twitter, Shah Rukh trended on the social media site.

“Shah Rukh Khan gets featured on #burjkhalifa for the 4th time. Only Actor in the world to achieve this. He is the real pride of our country,” wrote one user.

“The love story of The World’s Biggest Superstar & The World’s Tallest building,” posted another netizen.

Another fan wrote: “You are a king in every way SRK. For years, SRK has featured on the Burj Khalifa … he is admired, loved, respected and wanted the world over… and then people try to compare him to others. The man is in a league of his own!”

BJD A People’s Movement, Says Naveen Amid JP Nadda Call To Uproot Its Govt In Odisha

Dussehra: Know ‘Mundabasa’, A Ritual Performed Only In This Shakti Shrine Of Odisha