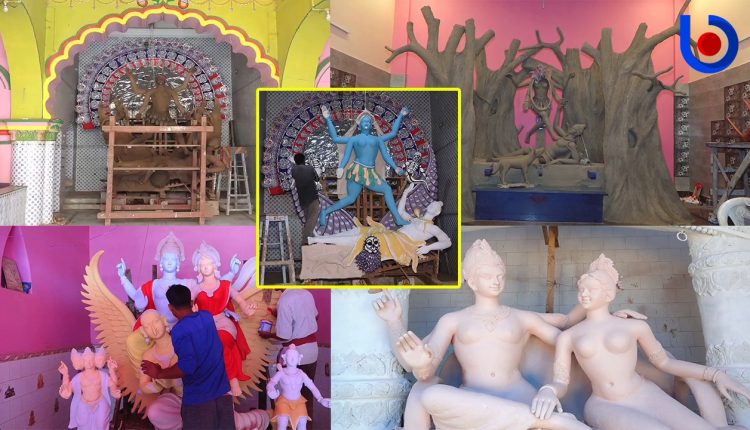 Jajpur: After two years of Covid curbs, Odisha’s Jajpur and nearby areas are bustling with activities to celebrate Kali Puja in a grand way this year.

With just a day left for the much-awaited festival, preparations are in the last leg at 45 Puja pandals in the town where Goddess Kali will be worshipped, while people are eagerly waiting for a slew of cultural programmes planned this time.

While artisans are giving final touch to idols, designers and decorators are busy in decking up Medha and gates. The Kali Puja will be held with full participation of people after a gap of two years, said Rajendra Sahu of Habeli Bazar Puja pandal.

For last two years, the festival remained merely a ritual without people’s participation in view of Covid pandemic, he said.

Stating that preparations for the festival are almost complete, Sahu said artists from different places of Odisha and other states will perform cultural programmes for four nights for which people are eagerly waiting.

Kali Puja is going to be celebrated with much pomp and gaiety in the town this time, Rabindra Sahu of Narayan Chhak Puja pandal said.

Nayan Chatterjee of Badabazar Puja Committee said Jajpur is famous for Kali Puja and people from different parts of the state throng the town to witness the unique way in which it is celebrated.

In order to ensure smooth celebration of the festival beginning on Monday, the district administration and police have made elaborate arrangements to prevent any untoward incident during the festivities.

As the festival is being celebrated in a big way after a gap of two years, a large number of people from different parts of the district and outside are likely to throng puja pandals, said district Collector Chakravarti Singh Rathore.

Therefore, adequate measures have been taken to maintain law and order and the puja committee has been urged to ensure discipline during the festival, he said, adding that steps have also been taken for effective traffic management.

In order to ensure cleanliness and check pollution at puja venues during the festival, the administration will give away prize of Rs 10,000. The aim is to ensure that people do not face inconvenience, the Collector said.

Special arrangements have also been made for smooth immersion of idols to be held on two days this time. Traffic route charts have been prepared to ensure discipline and maintain law and order.

Local residents said Kali Puja plays a major role in strengthening harmony and brotherhood among different communities in Jajpur. People belonging all communities participate in the festival every year, they said.