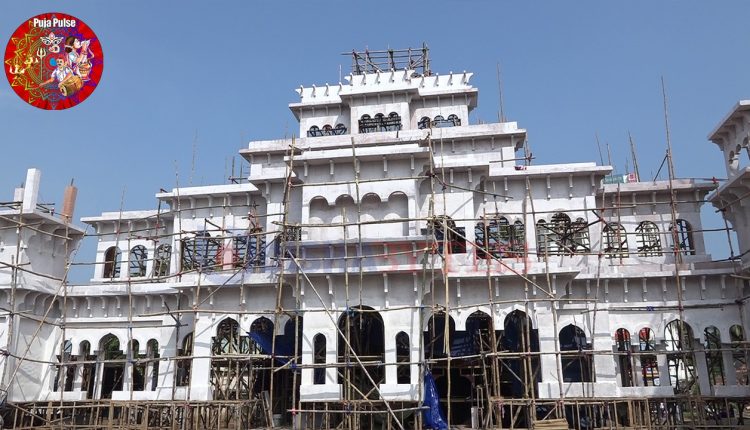 Bhubaneswar: Apart from Rajasthan’s Jodhpur Palace, the replica of another palace will be put up as a facade of a Durga puja pandal in Odisha capital this year.

Bomikhal Durga Puja Committee will be creating a replica of Mysore’s Lalitha Mahal at its pandal this year. Lalitha Mahal is the second largest palace in Mysore located near Chamundi Hills, east of Mysore city in Karnataka. The palace was built in 1921 on the orders of Maharaja of Mysore Krishnaraja Wodeyar IV for the exclusive stay of the then Viceroy of India.

The replica of Lalitha Mahal will be about 120-ft wide and 80-ft long. The puja committee has drawn up a budget of Rs 40 lakh for this year’s pandal decoration. Around 30 craftsmen from West Bengal led by Tapas Chandra Bhuyan have been engaged in making the pandal for more than one month.

Meanwhile, Sitan Behera of Cuttack is crafting the ‘medha’ (backdrop) of about 20-ft long and 15-ft wide for Devi Durga’s idol.

“We will be celebrating the 59th Durga Puja this year. As Dussehra is being celebrated after two years of COVID restrictions, we have made preparations for a grand celebration,” chief advisor of the committee Sukant Pradhan told Odisha Bytes.

“We are expecting a huge crowd this time and accordingly, arrangements have been made for vehicle parking near Bhuasuni temple, Shiva temple beside the pandal, near the flyover, and four-wheeler parking near Alekh math opposite our pandal,” he added.

Stating that around 50 volunteers would be engaged to ensure smooth darshan of Devi, he said they have submitted the list of their names at Laxmi Sagar police station soon. Arrangement for wheel-chair has also been made for senior citizens and specially-abled persons, he added.

“We have focused more on light decoration this year apart from Meena Bazaar, fast food kiosks and shopping stalls. Around 20 CCTV cameras have been installed in the area to keep a watch on anti-socials,” Pradhan said.

The entire stretch from Esplanade mall to Jharpada flyover would be decorated with different colours and designs of lights. Around 3,000 devotees will be offered prasad on Ashtami day. A cultural programme will be held on Sasthi while several melody nights have also been arranged for the following days.

Notably, a live telecast of the puja pandal will be arranged for devotees this year.