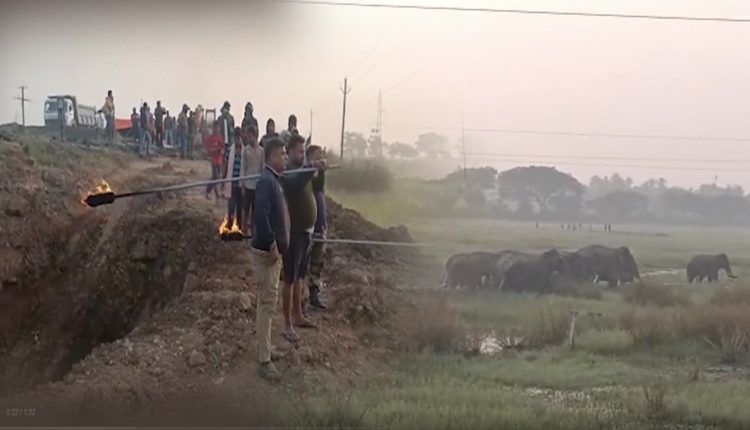 Cuttack: Vehicular movement was disrupted on National Highway No. 55 between Odisha’s Cuttack and Sambalpur due to movement of elephants in Athagarh area, triggering panic among locals and commuters.

After the herd of elephants entered human habitation in Athagarh and Kusapangi Dihasahi area near the highway on Thursday night, locals as well as commuters have been in a state of fear, according to reports.

On getting information, personnel of two forest ranges reached the site and launched an operation to drive the jumbos back into the forest by using fire, crackers and siren. Local residents have also joined the forest personnel in the drive to send back the elephants into the forest.

Meanwhile, experts and locals reportedly stated that the teams of personnel from two forest ranges should maintain proper coordination between them in order to drive away the jumbos in a safe manner.

Sources said that the animals were believed to have sneaked into human settlement in search of agricultural fodder and the operation to send them back to the forest is being carried out in such a manner that there is minimum damage to crops and other property. Safety of people should also be ensured.

The forest officials have advised people not to tease the animal and keep a safe distance. They have also asked drivers to cautiously drive the vehicles near the elephant crossing zone.