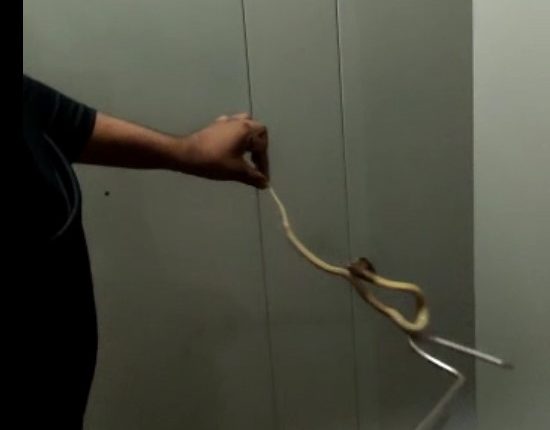 Bhubaneswar: A venomous Monocled Cobra was rescued from inside the lift of an apartment in Odisha capital on Thursday.

Nagendra Mishra, a resident of Adyasha Villa apartment near Balianta canal road in Bhubaneswar, spotted a small snake lying in a corner of the lift while he entered it to go to his flat in the morning. He came out of the lift and closed its doors.

Mishra immediately informed other residents and advised them not to use the lift. They also called general secretary of Snake Helpline Subhendu Mallik seeking help to rescue the snake.

On the direction of Mallik, a member of the Snake Helpline, Amarjit Behera, went to the apartment. On opening it, Amarjit found the snake inside. He identified the snake as a baby Monocled Cobra which measured 2 ft in length.

He carefully rescued it and put it in a bag. Later, Amrajit took the venomous snake to a natural habitat and released it there.

Male Nudity In Films, Vulgar Or Aesthetic? Who Has Dared It In Bollywood?