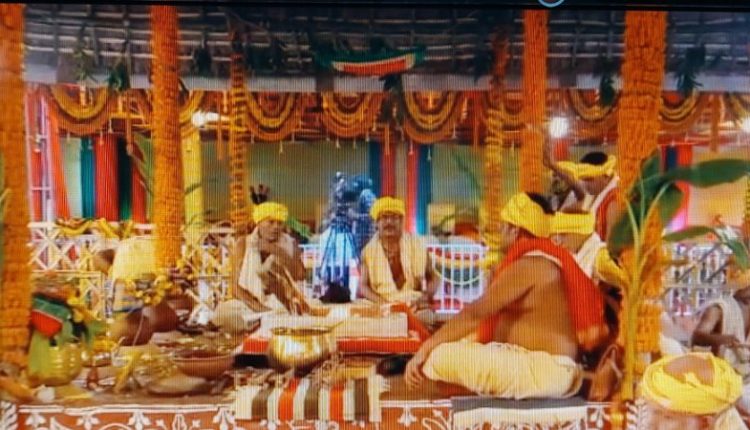 The air rented with sholkas as priests chanted shlokas and lit the yajna fire at the yajna mandap built at the north gate of the temple.

As per scriptures the Panchakarma was performed by Rajguru and Acharya at Yajna Mandap, followed by Puja at the four gates of the Yajna Mandap after Surya Puja. The yajna began at 2.30 pm, said Chief Administrator of the Shree Jagannath Temple Administration, Krishan Kumar.

A total of Rs 331.28 crore has been tendered for the project which has been awarded to Tata Project. Various projects related to the convenience and religious sentiments of the devotees are being implemented in the proposed project, Kumar added.

Chief Minister Naveen Patnaik is likely to attend the groundbreaking ceremony and yajna completion puja (purna ahuti) on November 24. He is likely to spend two hours in the town on the day during which he will lay stone for the project and felicitate individuals and institutions who have donated land and contributed to the project, the SJTA Chief Administrator said.

Sankaracharya of Gobardhan peeth Swami Neeschalananda Saraswati will be present on the occasion.

As part of the project, there will be a seven-lane wide pathway around the Meghnad Prachir of Sri Jagannath Temple.

The project includes construction of a 7-lane wide pathway along with the temple boundary for devotees to circumambulate the shrine and a separate lane for the deities.

Apart from that, 4 security towers on the four sides of the corridor, cloak room and underground parking will also be constructed.

Also Read: Know All About The Heritage Corridor & Parikrama Marg In Puri

COVID Vaccine Booster Dose: What Is The Latest Thinking In India?