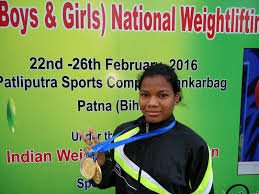 Bhubaneswar: Jhilli Dalabehera from Odisha is among the two Indian lifters selected for Junior World Championship slated to be held at Tashkent in Uzbekistan from July 7.

In April, Jhilli had won a silver medal in the women 48 kg category in the Asian Junior Men and Women Weightlifting Championships at Urgencg, Uzbekistan.

Last year, she along with Sneha Soren had made it to the Indian team for Commonwealth and Oceania Championships held in Australia.

Bringing laurels to the state, another shuttler Rutuparna Panda has been selected for Asian Games 2018. Chief Minister Naveen Patnaik tweeted, congratulating her for being the first Odia woman representing India in Badminton.

Congratulated Rutuparna Panda on her selection for @asiangames2018. She will be the first Odia woman to represent India in badminton at #AsianGames. #Odisha as an emergent hub for badminton surely gets a fillip. Best of luck Rutuparna #OdishaForIndia pic.twitter.com/WbTh2DZBC5