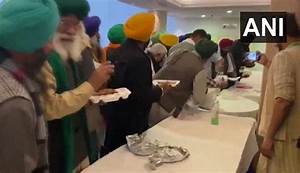 New Delhi: Leaders of farmers’ groups who attended a meeting with representatives of the Centre on Thursday refused to accept food and tea offered by the government, reported news agency ANI.

A 40-member farmers’ delegation turned up at Vigyan Bhawan for a second round of deliberation with the Centre on the ongoing ‘Dilli Chalo’ protests, which is into its eighth day.

They, however, brought their own food, determined not to accept government hospitality until their demands were met.

A video has surfaced which shows farmer leaders having food during lunch break. “We are not accepting food or tea offered by the government. We have brought our own food,” one of them says.

#WATCH | Delhi: Farmer leaders have food during the lunch break at Vigyan Bhawan where the talk with the government is underway. A farmer leader says, “We are not accepting food or tea offered by the government. We have brought our own food”. pic.twitter.com/wYEibNwDlX

The agitating farmers had said earlier that they had marched to Delhi with enough foodgrains to sustain them for months, reflecting how serious they were about the protest demanding the withdrawal of three farm laws.

The first meeting, held on Tuesday, didn’t yield any result as farmers’ representatives turned down the Centre’s proposal to set up a committee to address their issues.