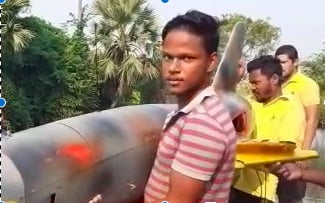 Balasore: Fishermen of Odisha’s Balasore district have reportedly netted a rocket-like object while fishing in the deep sea off Bahanaga coast.

They have informed the Integrated Test Range (ITR) at Chandipur about the long and heavy metallic object.

Coincidentally, the DRDO had tested Pinaka Missile System from ITR on Wednesday.

However, this is not the first time that fishermen have come across such a rare catch. Two months ago, an unmanned aerial vehicle (UAV) flight tested from the ITR had landed in the net of a group of fishermen of Talapada while they were preparing to collect fish. It was the British-made target drone Banshee.

Date For Admission To PG Streams Extended In Odisha

Arnab Goswami Lodged At School Instead Of Jail; Know Why

36 Fishermen Arrested For Fishing In Prohibited Area Of…