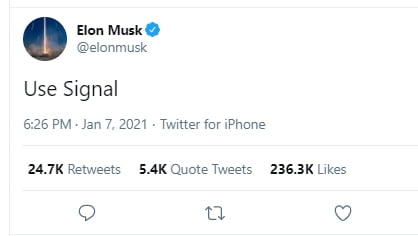 New York: Tesla CEO Elon Musk’s confusing “Use Signal” tweet has led to many wondering what it is. Signal is an alternative app to WhatsApp and Musk has raised concerns over WhatsApp changing its privacy rules.

Musk, known to spar with Mark Zuckerberg, implied WhatsApp users to switch to Signal, a more privacy-focused messaging service that is widely used by privacy researchers, journalists and security experts.

Signal has received a good number of downloads after Musk’s tweet.