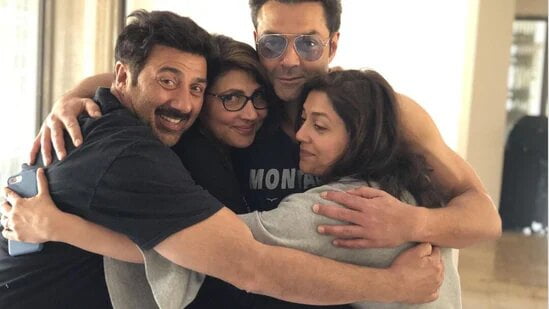 Known to be a fierce and private family man, Sunny celebrate the occasion with members of various media outlets at a recording studio in Mumbai. The actor is also gearing up for the sequel of his cross-border romantic tale Gadar: Ek Prem Katha. cut a ‘Gadar 2’ themed cake to mark the celebration. He was accompanied by director Anil Sharma.

The official motion poster of the film, which opened up with the tagline ‘The Katha Continues’, was revealed on Dussehra. The film marks Deol and Ameesha Patel’s collaboration after two decades and also stars child actor Utkarsh Sharma.

Deol also revealed that he has various projects in his pipeline. The director spoke about the overwhelming response to Gadar 2 announcement, adding that it took years for the makers to come up with a gripping storyline to entice the audience.

Younger brother Bobby Deol took to his Instagram handle and shared a photo of the duo along with their sisters, Ajeita and Vijeita. The siblings can be seen hugging it out as they pose for the camera. In the caption, Bobby Deol wrote, ‘Happy birthday bhaiya you mean the world to me[sic].’ Other actors like Chunky Pandey, Darshan Kumaar and Sachin Shroff reacted to the post and wished the actor.

Apart from Gadar 2, Sunny will also be seen in the family drama Apne 2. He also has R Balki directorial film Chup. The actor will be working alongside Dulquer Salmaan, Pooja Bhatt and Shreya Dhanwanthary, ZeeNews reported.

Why Is There A Sudden Spike In Bronchiolitis Cases Among Infants, Young Children? Doctors Explain