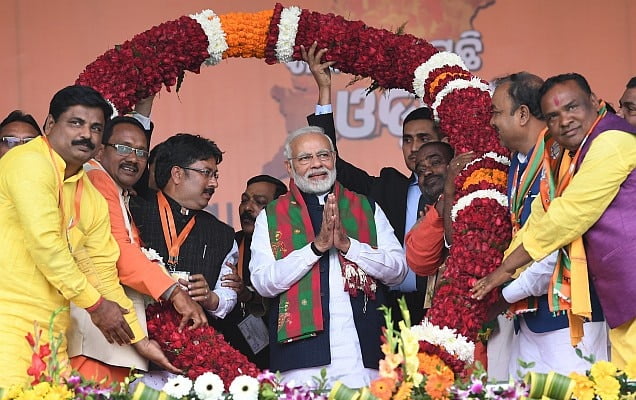 Bhubaneswar: Elections are barely a few months away but Prime Minister, Narendra  Modi continues to fight shy of  taking  on Odisha chief minister, Naveen  Patnaik, his chief rival in the state. His reluctance to launch a direct attack on Patnaik was evident at his Khurda rally on December 24. If the state BJP leaders thought he would don the combat gear at Baripada they were sorely disappointed.

Saturday’s Baripada rally of Modi was almost the mirror image of the Khurda event where he had carefully avoided naming the chief minister even when he threw occasional barbs at his government on issues such as corruption. There was no direct reference to Patnaik even at Baripada where the only time he targeted the state government was when he raised the issue of women’s security in the context of the Pipli gang-rape verdict that saw both the accused walking free for want of evidence. The Prime Minister also reiterated his appeal to the state government to join the Centre’s Ayushman Bharat scheme, once again echoing Khurda.

The better part of his speech at Baripada was devoted to castigating the Congress and invoking the ghost of  AugustaWestland helicopter deal with “ Mama Michel” at its centre. He lavished praise on defence minister, Nirmala Sitharaman for her able defence of the government in the parliament over the Rafale deal and sought to foreground some of the achievements of his government with focus on Mission Indradhanush.

But he treated Patnaik with kid gloves on a day when Odisha chief minister held his own parallel show at Puri announcing interest free loans upto Rs.3 lakh for women self help groups (WSHGs) in an apparent bid to steal the Prime Minister’s thunder.

What is it that makes Modi avoid attacking Patnaik even though his lieutenant-in-chief and BJP national president, Amit Shah has declared an all out war against the Odisha chief minister? Is it a deliberate good cop, bad cop act with Modi being soft towards Patnaik while Shah and his brigade do not pull their punches?

Considering that Modi does not believe in the niceties of gentlemanly politics there are obvious political compulsions that dictate his present approach towards the Odisha chief minister who, despite his avowed policy of maintaining equidistance from Congress and the BJP, has shown a lot of flexibility in the past supporting the NDA government at crucial junctures. When the NDA was desperately seeking allies to get theMines and Minerals (Development and Regulation) (MMDR) Amendment Bill, 2015 passed in the Rajya Sabha the BJD had come to its rescue.

Similarly, the party, which had supported NDA candidate, Ram Nath Kovind in the 2017 presidential polls, threw its weight behind Harivansh, the combine’s nominee for the post of Rajya Sabha deputy chairperson in August last year making it an almost one-sided contest. The BJD had also staged a convenient walk out during the no-trust vote against Modi government last July.

Given this backdrop one cannot blame Modi if he is nurturing hopes of Patnaik bailing him out in the event of next election turning out to be a tight race between BJP-led NDA and its rivals which seems to be a distinct possibility. The first warning signals came from Uttar Pradesh, politically India’s most crucial state, within hours of Modi’s rally at Baripada with Samajwadi Party chief, Akhilesh Yadav and Bahujan Samajwadi Party supremo, Mayavati deciding to join hands to keep BJP at bay. That these two parties, which appear reluctant to take the Congress aboard, can upset the BJP’s apple cart in UP, is evident from the fact that their combined might had made saffron candidates bite the dust in three recent bye-elections held in the state that accounts for 80 Lok Sabha seats.

New political combinations and permutations, most of them aimed at hobbling the BJP, are also likely to emerge in other parts of the country with West Bengal chief minister, Mamta Bannerjee calling upon like-minded parties to ensure one to one contests between BJP and its rivals and Telengana chief minister, K. Chandrashekhar Rao aka KCR trying to forge a federal front of regional parties. Rao recently met Patnaik in Bhubaneswar but the latter’s response to the proposal has been rather muted which suits Modi who, from all indications, seems keen on keeping a channel of communication open with Odisha chief minister. The Prime Minister, who knows that each Lok Sabha seat is going to count in the post-poll scenario, apparently believes in the dictum that discretion is the better part of valour. Instead of indulging in chest thumping in Odisha, where Patnaik’s Biju Janata Dal is likely to have a lion’s share of the Lok Sabha seats again, he would rather have the Odisha chief minister as a friend who, if the push comes to the shove, can be persuaded to become an ally.

India To Make CoWIN Available To All Countries: PM Modi