What Went Wrong With Flight 1344 At Kozhikode Airport? Search For Answers

The aircraft was declared airworthy and commissioned on November 15, 2006. For the record, the same aircraft had flown to UAE from Kozhikode and back four times in the past week.

The Boeing 737-800 is a next generation plane that is often called as 737 NG in the Boeing 737 family. This model has quite a few changes from the Classic 737 — the wings are 25 per cent bigger. The wings have 16 feet of extra span from the existing 737 Original and Classic models, enabling this aircraft to carry 30% more fuel while giving an extra mileage of 900 nautical miles.

This was done to compete with Airbus after it designed Airbus 320 CEO and Airbus 320 NEO. The other unique feature is the braking system as Boeing made the brakes 250- 320 lighter depending on the aircraft configuration making the fuel burn reduce by 0.5%.

The 737 NG series planes from the Boeing stable are quite sturdy unlike the next gen planes in the 737 MAX series which still have some teething problems. 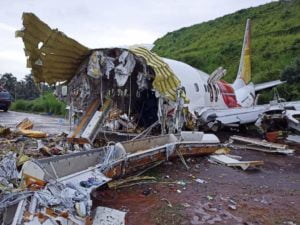 Flight 1344 was being commandeered by Captain Deepak Vasant Sathe, an experienced IAF pilot, and First Officer Akhilesh Kumar. The flight was supposed to touch down at Kozhikode airport which is a table-top airport. Such airports are located on a plateau and at times surrounded by gorges.

What may be the cause for the crash?

Was there a tail wind — a phenomenon in which the wind flow is from the tail side while landing. As per METAR (aviation weather report issued at 30-minute intervals), the tail wind was 12 knots, or keeping the correction, it may have been 11 knots. But it may not be correct as METAR had given one set of information and the pilot may have experienced higher wind speed as was the case with SpiceJet aircraft that had skidded at Calicut airport in 2017. 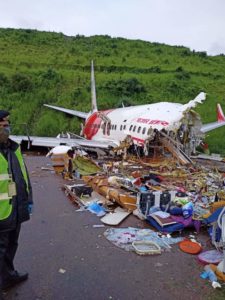 The aircraft, it seems, landed in the midway of the 2860-meter-long runway (but read it now as 2700-meter-long after construction of the runway end and safety area). The aircraft could have been caught in the EMSA (Engineering Material Arresting System) or arrested area after the runway ends. But in this case, the airport did not have MESA and its presence could have arrested the aircraft overshooting the runway. The airstrip has a bump in the middle and thus after crossing that point, normally all the aircraft face an excess acceleration. The presence of rubber material on the runway could have hindered while braking. The rubber material might have been from the earlier plane which had landed.

The whole picture will come to the forefront after all the information is deciphered from the Black Box. Lot of questions have been raised now. Why did the pilot abort the landing on runway 28? Why did it hover over the airport before landing on runway 10? Why the belly landing? Why it did not land in the alternate airport which was 45 minutes away and fuel was available for that distance?

[Watch] Man’s Marriage Proposal Goes Awry As He Gets Kicked By Partner, Falls Into…

Co-Pilot’s Wife, Due To Give Birth In 15 Days, Unaware…

[Watch] Air India Flight Breaks Into 2 After Crashlanding In…