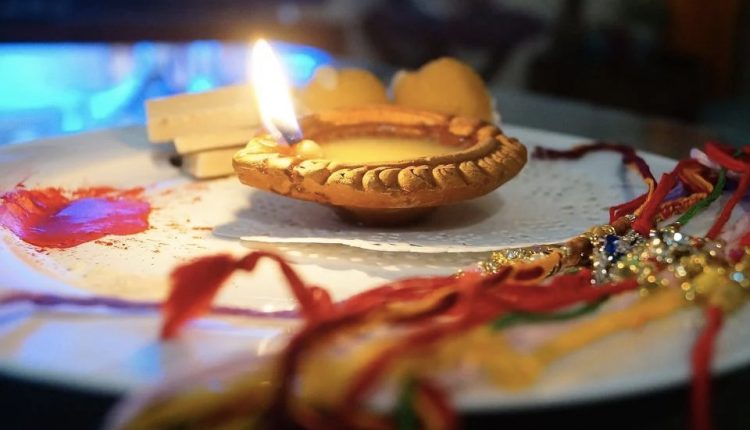 Rakhi Purnima or Gamha Purnima, which happens to be a Hindu festival, is celebrated in different parts of India on the full moon day of the holy month of Shravan. Also called Shravan Purnima, this festival strengthens the brother-sister bond. On this day, a sister ties Rakhi on the wrist of her brother and prays for his bright future. In return, her brother resolves to protect her. Similarly, cattle are worshipped on this auspicious occasion.

King Bali, a sincere devotee of Lord Vishnu, was considered a great donor and a benevolent and generous ruler.  Incarnating as a dwarf Brahmin avatar (Vamana), Lord Vishnu approached Bali and requested “three steps of land”. Bali promised him the desired gift, but Vishnu in Vamana Avatar transformed into his colossal form. The first foot encompassed the whole of heaven in one step while the second foot covered the entire earth. When asked where he can put his promised third step, Bali offered his own head. Vishnu then sent Bali beneath the earth –Patala. However, impressed by Bali’s generosity, Vishnu offered him a boon. As Bali wanted him to stay with him in the netherworld, Lord Vishnu granted it and started staying in Patala. All the Gods and Goddesses were perturbed over this and Devi Laxmi wondered as to how to bring Vishnu to his own place. Finally, Devi Laxmi entered Patala by incarnating as an old Brahmin woman and tied a sacred protective thread around Bali’s wrist, addressing him as her brother. When Bali asked her to seek some gift, Laxmi sought permission to take back her husband with her. Recognising Laxmi who treated him as a brother, Bali allowed Lord Vishnu in Vamana avatar to return to his own abode.

A similar story regarding Krishna and Draupadi figures in the Mahabharat. Sri Krishna’s finger was injured when he killed the tyrant Shisupala. Noticing blood oozing out of the wounded finger, Draupadi tore a piece of cloth from her saree and tied it around the injured portion following which bleeding stopped. Krishna could feel the love of a sister in it. Later, when the Kauravas tried to disrobe Draupadi in their court, Krishna protected her dignity by providing thousands of clothes.

Tale of Humayun and Karnavati

One can also recall the story of Mughal emperor Humayun and Queen Karnavati. When Bahadur Shah Jaffar attacked Mewar in the middle of the 16th century, Karnavati felt helpless. Finding no other way, she wrote to Humayun and sent him a Rakhi. Impressed with this, Humayun directed Bahadur Shah to stop the offensive and take back the army.

When Rani Laxmibai visited Puri with her father to pay obeisance to Lord Jagannath during her childhood, she had tied Rakhi to the son of their priest. The same boy later became famous as Chakhi Khuntia. When Laxmibai went to the battlefield after the death of her husband, Chakhi Khuntia also joined her as a brother in fighting the British.