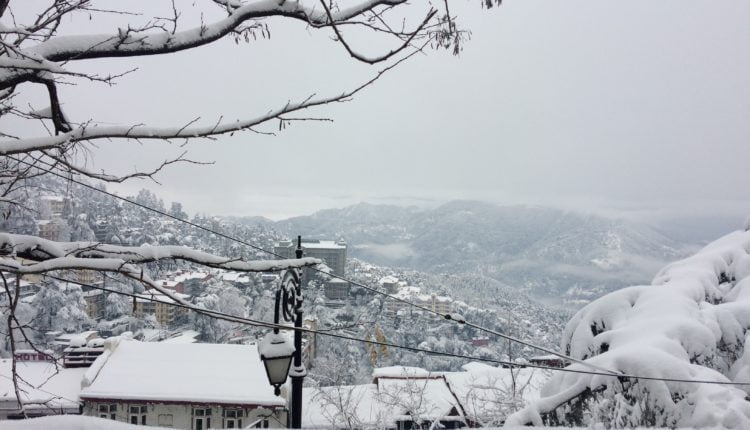 We decided we would go to Shimla in the height of winter last year. Why Shimla? We all had our reasons of course. The son wanted to experience snow, a white winter, where ever it was possible in India, I had long dreamed of visiting Kipling country as Ruskin Bond had written so much about it, Christ Church, Lurgan Sahib, Kim and the Lama, the unique train journey on the Himalayan Queen that chugs elegantly up the Himalaya. We took the Shatabdi from Delhi to Kalka, the usual familiar route. Then took a bus that promised us a ride up to Kasauli but dropped us in the middle of nowhere with icy winds and mountain pines for company. Sharp protests and a considerate bus driver got us a taxi with an affable Himachali driver who tried desperately to locate our OYO hotel till all signals got lost in the lofty mountains, and we hit the dead-end of a mountain trail.

As it was getting dark, and we were still homeless in the hills with dipping temperatures and numb hands, we hastily urged ‘Lalitji’ our new found Man Friday to drop us to the nearest Himachal Tourism hotel, which he did but there was no room in the inn. The Himachal Tourism hotel receptionist suggested we try our luck at Byrne Cottage next door, built in 1880. What luck! And despite our reservations, we checked into the beautiful heritage cottage that came up when the hills had just about been discovered by the British who wanted to recreate a slice of life back home in the mighty Himalaya. 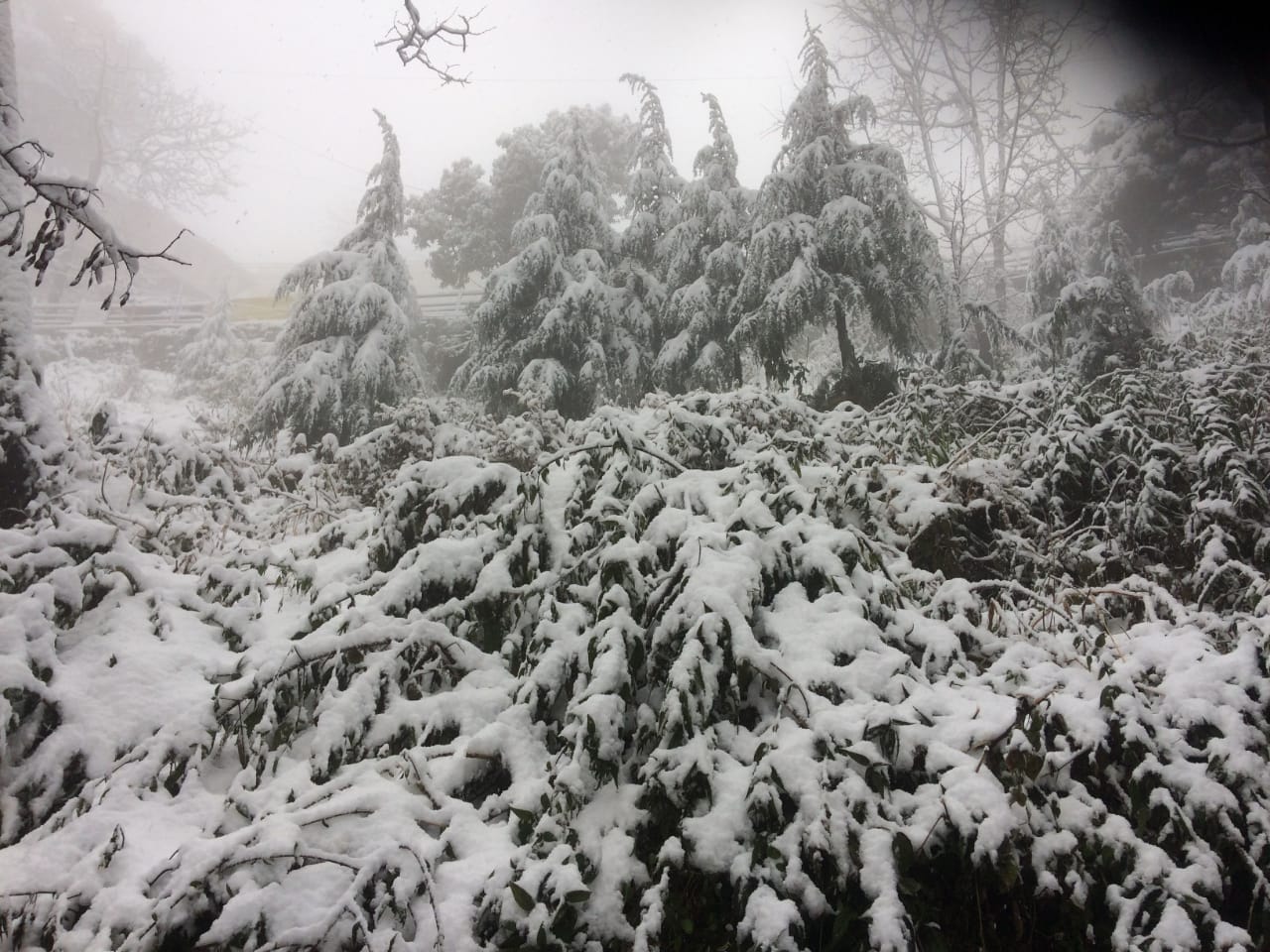 The cottage with its huge open space in front and the verandah facing it offered breathtaking views of the Kasauli mountains when the mist cleared. Majestic pine trees, the rose-gold snow-clad peaks when the sun touched them, the folds of blue mountains fading into the horizon — a full panorama. As one walks downhill to the Kasauli market, one can see another old bungalow called Fateh with its wrought-iron gate, its driveway lines with dry ochre leaves, inviting visitors from a long-lost world that the present-day tourist can only try and imagine.

A short walk leads one to the life-size bronze statue of hockey wizard Major Dhyan Chand. An elderly snack-stall owner coaxing food out of his little stove fills in with information, “Dhyan Chand tha pehelwan, hockey maarta tha. Chandigarh ka admi tha. Army walon ne unki statue lagwai kyunki fauji banda than na” (Dhyan Chand was a wrestler, could wield the hockey stick with finesse, so Army officers put up a statue of him as he was an Army man). Near the statue of Major Dhyan Chand, is the cement statue of a dog painted black. The elderly uncle, while buttering his ‘maska-bun’ says, “Angrejjon ka raj tha, Unhi ka kutta tha. To statue bana diya.” (The statue came up during British times). It starts drizzling and at times the intermittent showers can get quite heavy. At the same time, it is freezing. So we head to the Heritage Market to have steaming aloo tikkis and gulab jamun washed down with sweet milky tea, and then quickly buy two large umbrellas to continue our walk.

Our next stop is to be Sunset Point, though we are going there around noon and in the rain. Kasauli being a cantonment is beautifully preserved with several old heritage structures and bungalows maintained and cared for by the Army. As we walk down, we pass by author Khushwant Singh’s bungalow, Raj Niwas, and yet another called The Priory owned R.K. Bose (actor Rahul Bose?), and then the Kasauli Club with a sign that bars entry to ‘maids’ and those not following the dress code. Its library is believed to have a rich collection of books dating back to colonial times. But since we are not members, and are dressed in rugged jeans we don’t dare venture in. By now it has started raining heavily and we realise we three are the only people on the road. The presence of a jawan guarding the stretch who urges us to keep moving, saying ‘aage chalte jao bhai’ bolsters our confidence and after a ten-minute walk in the rain we reach Sunset Point. Here the mountains seem endless, and looking below one can see roads snaking up their way through the hills, with cars, buses, trucks, bringing more people to an already fragile ecosystem. 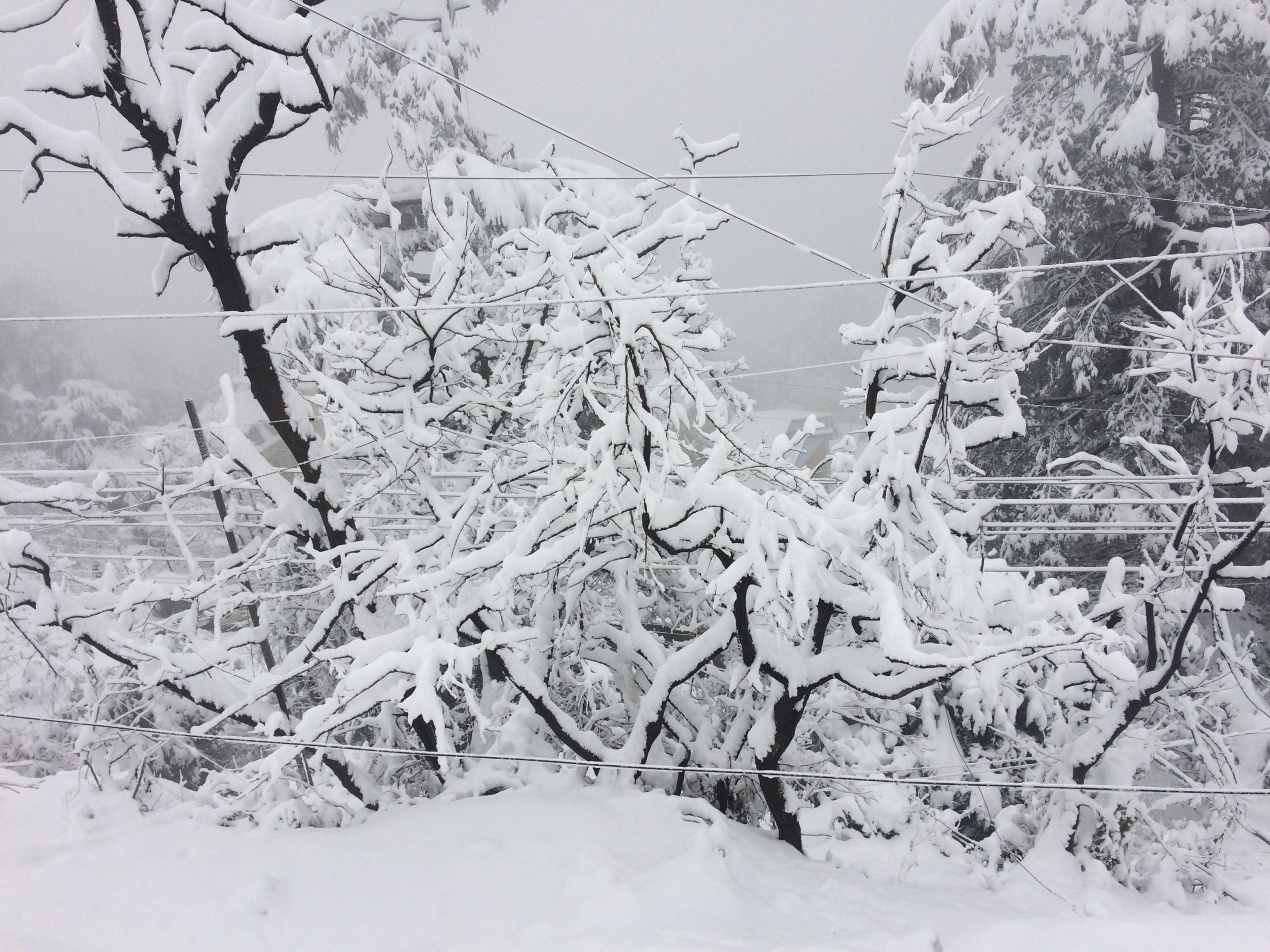 By the time we head back to our cottage, it is getting dark. We pick up supplies to cook our dinner, a homey meal of boiled eggs sautéed with a handful of onions in butter and very basic peas fried rice. The pressure cooker takes much longer to hiss, and an impatient cook from the plains used to conjuring up a meal in twenty minutes flat, could only feel frustrated. Washing utensils and clearing up is another chore that each member of the team tries to postpone till it can wait no longer and we divide up the work clinically.

The next day, the weather is slightly better. So, we decide to explore Christ Church with its wooden floors and stained glass windows. A plaque inside the church mentions the name of two brave Englishmen who had died while trying to save it from a devastating fire that threatened to swallow up all of Kasauli. It is a small church, smaller than the much grander Christ Church in Shimla, immortalised in Rudyard Kipling’s ‘Kim’.

As we walk uphill, we gaze up to catch a glimpse of Ludlow Castle, and the CERI of what was earlier Pasteur Institute. A small tribe of Englishmen had made this little hill station their home, built pretty cottages and designed ornate buildings, a few had probably gone native drawn by the magnetic pull of India’s bazaars like Kim, or her spiritualism like Younghusband. 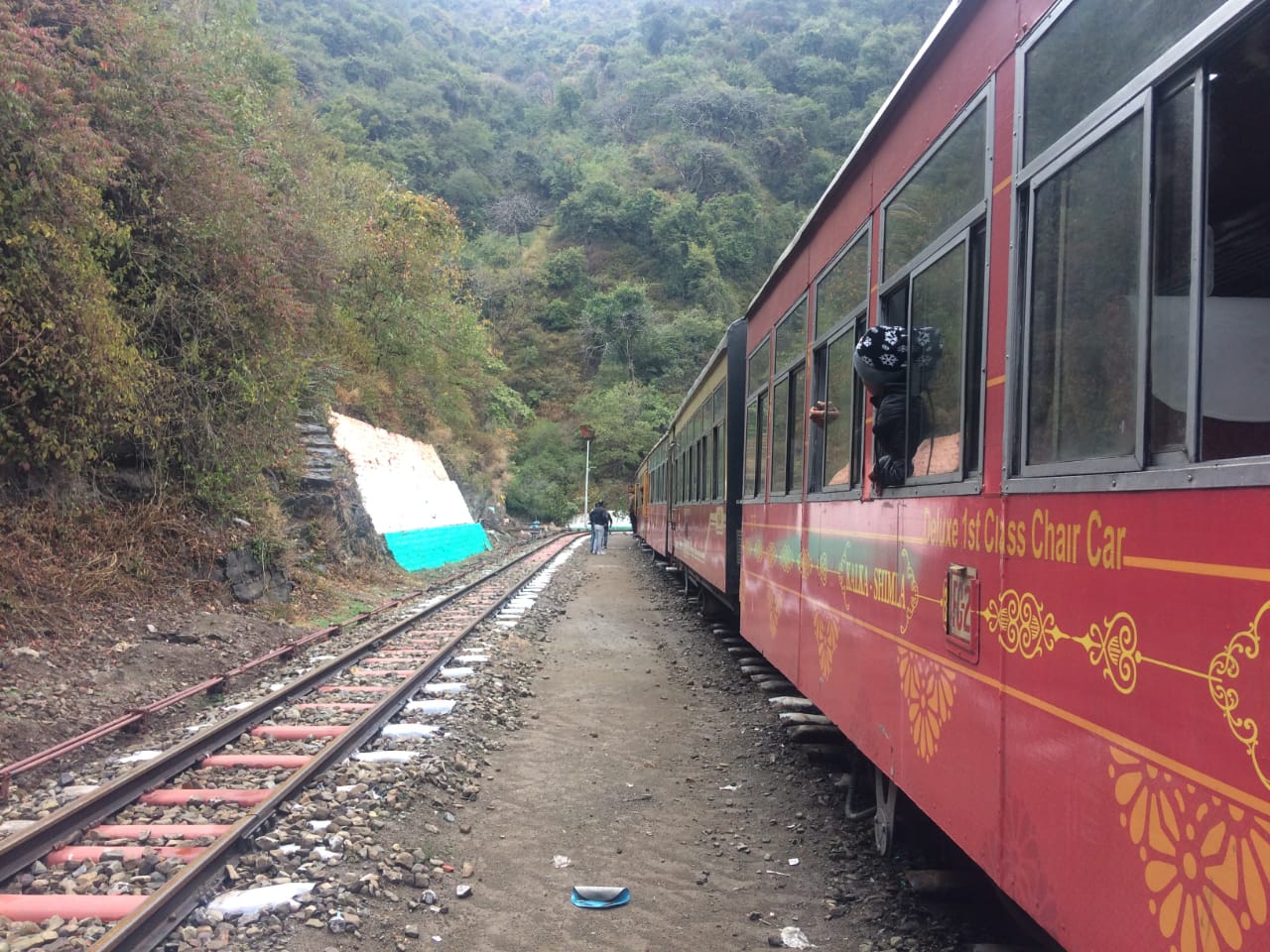 The next day we have to go downhill to the picturesque Kalka station with its wooden benches, British era shock absorbers for trains once again – this time to board the Himalayan Queen – the journey we have been dreaming about for years. It’s a Unesco Heritage site and worth every bit of the reputation it has for being one of the most scenic rail journeys of the world, apart from an engineering marvel.

Myths and legends abound about how this route came about. Among the most interesting are those about ‘Bhalku’, the venerable mountain seer who would tap the mountain with his staff and a route would reveal itself to him. Though no written records exist, oral tradition has ensured that ‘Bhalku’ is never forgotten. The other very tragic story is that of Barog, an Englishman who had got the alignment of the entry and exit points of the Barog tunnel wrong and was levied a fine of Re 1. Unable to stomach the humiliation, he shot himself and lies buried somewhere close to the Barog station. The station and little town are named after him. 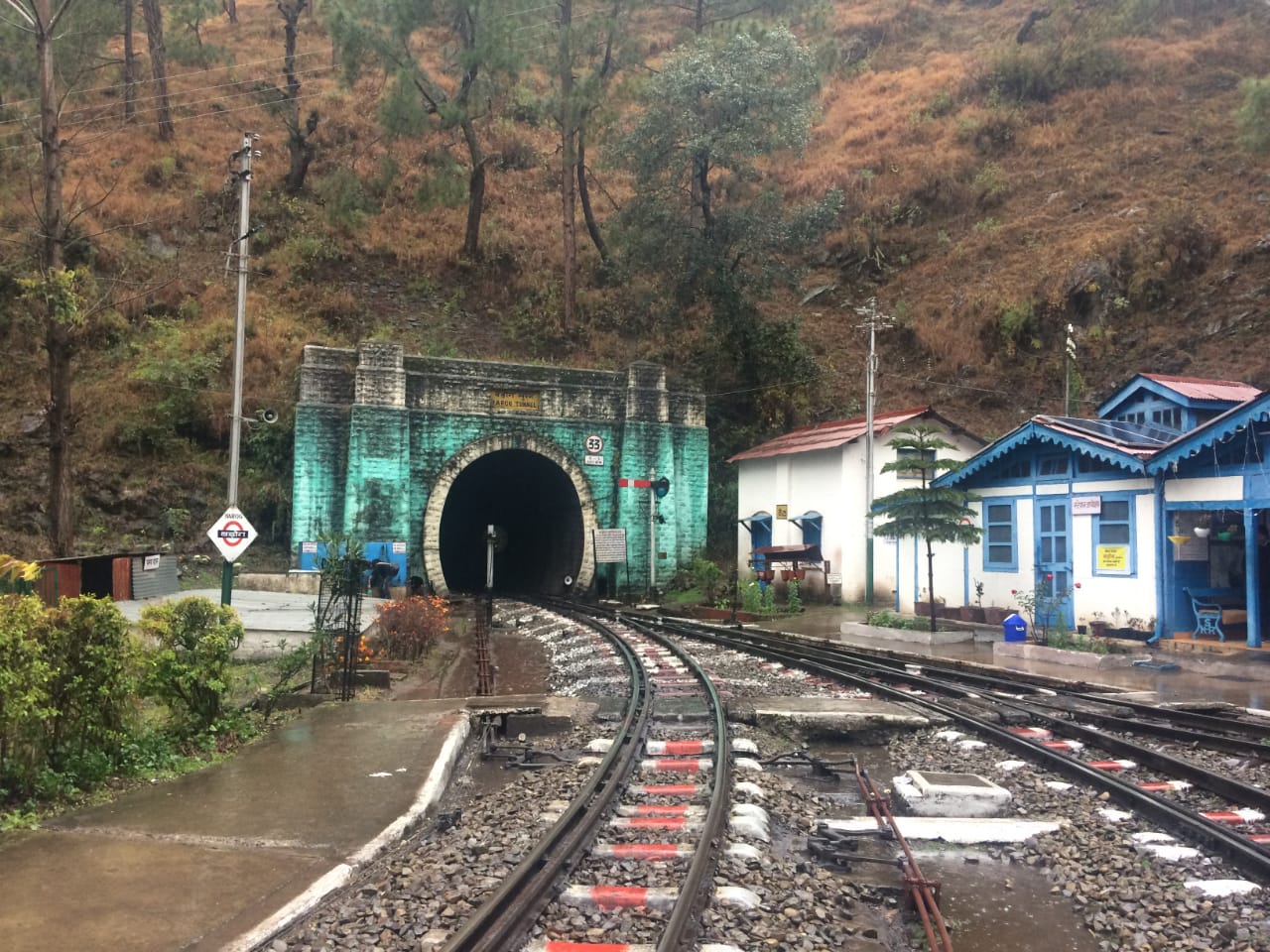 The Barog tunnel is the longest and also called the kissing tunnel. Each hill station, each train journey in India has its own bag full of stories, myths and legends. So many travels and journeys were cut short due to the pandemic. Yet, the pandemic also afforded an opportunity to return to the clear the mists of forgetfulness and return to the breathtaking views of the Himalayas, though only in thought.