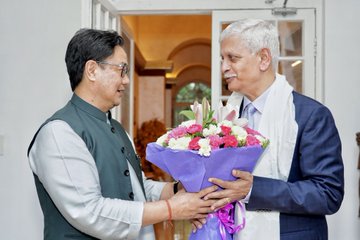 New Delhi: With Chief Justice of India (CJI) U U Lalit due to retire on November 8, Union Law Minister Kiren Rijiju on Friday asked the incumbent to recommend his successor.

As per the seniority convention, Justice DY Chandrachud is expected to take over as the next CJI. If appointed, he will have a tenure of over two years till November 10, 2024.

The Memorandum of Procedure (MoP) governing the appointment of members of the higher judiciary says that the senior-most judge of the Supreme Court is considered fit for appointment to the office of the Chief Justice of India.

Justice D Y Chandrachud was elevated as a judge in the top court in 2016. He served as the Additional Solicitor General of India in 1998 and was sworn in as the Chief Justice of the Allahabad High Court in 2013. He has been associated with the Bombay High Court too.

Give Until It Hurts, Mother Teresa Remembered