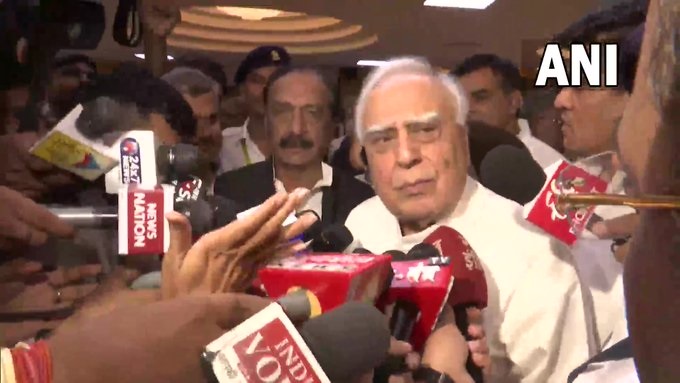 New Delhi: Congress heavyweight and former Union minister Kapil Sibal on Wednesday finally made public that he had quit the party with which he was associated for over three decades. He announced the decision while filing his nomination for the upcoming Rajya Sabha elections as an Independent candidate with support from the Samajwadi Party (SP). Sibal’s is the second high-profile exit from the Congress after the ‘Chintan Shivir’ at Udaipur and poll strategist Prashant Kishor announced that he won’t join the party.

1 Sibal’s tenure as a Rajya Sabha member ends in July. The SP also supported Sibal during his previous election to the Rajya Sabha. Congress sources said there were indications that he would not get another Rajya Sabha nomination. Sibal’s primary Congress membership also expired earlier this year and he did not renew it.

Congress’ Rajya Sabha MP Pradeep Tamta slammed Sibal, saying that he left the Congress, which gave him everything, for the sake of one Rajya Sabha seat.

2 For the last two years, he had been rebelling against the Gandhi family. A minister during the Manmohan Singh-led United Progressive Alliance (UPA)’s 10-year rule from 2004 to 2014, Sibal in later years became part of the G-23, which wrote to party president Sonia Gandhi in 2020, seeking a complete overhaul of the party leadership and functioning.

3 Sibal has developed close ties with many SP leaders, including Akhilesh Yadav and Azam Khan. It was Sibal who represented Azam Khan in the Supreme Court and helped him secure interim bail. He also helped Akhilesh Yadav retain the party’s bicycle symbol in the year 2017.

“I am thankful to SP chief Akhilesh Yadav that he supported me. I also wish to convey my gratitude to Azam Khan for the support that he has given me, not just now but over several years,” Sibal said on Wednesday.

“We are all constrained by the fact that we are members of parties and have to abide by the discipline of that party but it is important to have an independent voice,” the former Union minister said while filing his nomination papers.

“We want to make a coalition and oppose the Modi government. We want to create an atmosphere in which we can oppose the BJP. I will personally work towards that,” he said.

5 Sibal can be the bridge between Congress and non-NDA parties ahead of the 2024 polls.