Why We Need To Eat As Less As Possible? Read Here 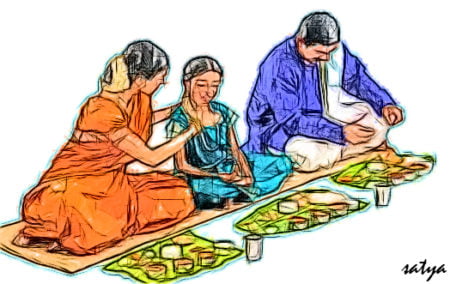 Many times, my one-liners get privileged views from different persons as per their own perceptions…at times close to correctness, at times just the opposite, at times opening up aspects that I had ever thought of. However, this line needs elaboration, as many vital health and social issues are involved in it.

Nature gave the higher animals the provision of storing energy to avoid intake of food and excretion always, unlike primitive organisms that have no other function except for surviving and procreating. Through this higher function of storage of energy, we could do with only two meals…wait, wait, am I saying it wrong?

A story that I read long back in a children’s storybook flashes in my mind. Lord Brahma (the creator), who delineated rules for the Universe in the beginning, gave a message through a clever fox to humankind that they should bathe four times in a day and should eat only once. While returning from “Brahmaloka,” a flight of birds flew over the fox’s head, which distracted him and reversed the message in his mind i.e. eating four times and bathing once.

Now people were very happy on earth. They started devouring food four times a day and enjoyed that a lot. Later, poor Lord Brahma came to know about the mismanagement on earth and was worried about the food crisis and the problems following after that. He called for the fox again and reprimanded him. But now, it was difficult to reverse the rule as the people on earth had got used to eating four times and were enjoying the same. Then the Lord gave a curse to the fox to give the call of “Hook-e-ho” four times.

If we analyse the story, it has great practical relevance. Our “Shastras” mention that eating two meals a day is ideal. A Yogi should take one meal a day, a Bhogi (Grihastha) should take two meals and a Rogi (patient) can take three. The concept of intermittent fasting and two meals a day is also gripping those who desire to reduce weight or maintain good health.

Looking around us, we find that we are munching most of the time. Are we reduced to primitive organisms again?? Apart from our routine meals,  we munch on chocolates, chips (junk food), drink several cups of tea and coffee and paan gutkha as fillers…..those who drink alcohol, are blessed with empty calories that are a little more than carbohydrates and little less than fat (7Kcal/ gm). And what it is all for? To appease a two-inch muscular organ “tongue”.

God gave us the other organs in pairs but only one tongue serving two functions..taste and speech….as if He knew the deadly nature of it beforehand. The small studded structures known as taste buds (papillae containing the taste buds) really make us their slaves occluding our logic and reasoning power. And how long does the pleasure of food last? A mere few seconds…or minutes??? Maybe a burp makes you realize…ah! What a meal I had!

As we go on savouring a meal and get satiated, the taste of food also becomes less attractive for us and maybe a good amount is left on our platter. We never spare a thought about how many mouths could have been fed on the leftovers that we threw into the dustbin and that by throwing this food, we let the efforts of so many farmers go waste.

There are so many brains at work to bring this food on our plate, thinking about growing extra crop through research, equal distribution, newer techniques of farming, averting the threat of hoarding, pricing of food, the suicide of farmers, economy, war …and…we let it all go waste!

Does Your Child Have COVID-19? Know What To Do

West Bengal Results: Six Takeaways From The Mother Of All Electoral Battles

Social Distancing, So Easy Yet Difficult; Why?

Over 50 Villagers Hospitalised After Taking Food At Marriage…

BMC Destroys Huge Quantity Of Food During Raids On Roadside…

COVID Impact: ‘Jatra’ Artists Forced To Perform On A…