Bhubaneswar: The IMD forecast about a cyclonic storm brewing in the Bay of Bengal could play spoilsport for the five-day International Sand Art Festival and Konark Festival, beginning December 1.

While the weather will remain dry on the inaugural day of the festival, rainfall activity is likely to begin from December 2 with light to moderate rain or thundershower at many places in south coastal Odisha, a few places in north coastal Odisha, Malkangiri, Koraput, Rayagada, Kandhamal and Dhenkanal and at one or two places in the rest of the state.

The cyclonic storm, Jawad, is expected to reach Odisha coast by December 4.

This year, the Konark dance festival will commence with performances by the students of Odissi exponent Madhavi Mudgal. The first day of the event will also feature performances by Kathak artiste Vaswati Mishra and her students from ‘Dhwani.’ 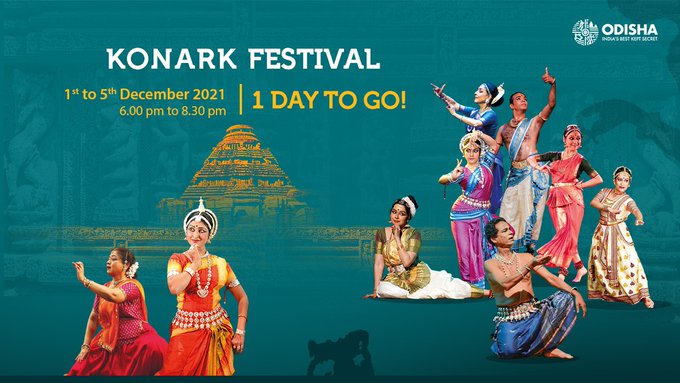 The second day will feature group performances by Anita Sharma, a leading Sattriya exponent and her students, followed by Odissi performances by Nilanjan Rout and his group.

The festival will culminate with an enthralling group performance by artistes of GKCM Odissi Research Centre and Kuchipudi recital by Jaikishore Mosalikanti and his group.

Puri Collector Samarth Verma told the media that the festival will be held with strict adherence to the COVID guidelines. “Accordingly venue capacity, the timing of the event and sequencing have been decided. The auditorium will operate at one-third capacity,” he said.

The coordination meeting of the department concerned has been completed. “We are hopeful of conducting Konark Festival and Chandrabhaga International Sand Art Festival successfully,” he said.

The programmes will be telecast and there will also be a facility for live streaming of the festivals, the collector said.

Three parking spaces have been identified for the three venues and there will be police presence at these places, he added.