Pipili: With the D-day for Pipili byelection approaching fast, electioneering reached feverish pitch on Monday with Chief Minister and BJD president Naveen Patnaik batting, albeit on virtual mode, for his party candidate Rudra Pratap Maharathy and Bhubaneswar MP Aparajita Sarangi campaigning for BJP’s Ashrit Pattanayak. The Congress campaign, however, seems to be losing steam with party nominee Ajit Mangaraj hospitalised due to ill-health.

This has fuelled discussions on whether the Pipili bypoll, necessitated by the death of Rudra’s father Pradeep in October last, will go the Bijepur way, with Congress out of the reckoning. In 2018, Bijepur in Bargarh district witnessed a high-octane bypoll following the death of Subal Sahu (Congress). The BJD fielded his wife Rita. And despite a spirited challenge from the BJP the regional party stole the show ostensibly because the Congress supporters voted for the Naveen party.

“The Congress appears to have all but given up,” said a bystander as a handful of listless Hand party supporters trying to garner support for Mangaraj moved around a village in Pipili block, which seems to have thrown COVID-19 norms to the wind for the time being. “Just look at the energy and show in the campaigning being done by the BJD and the BJP,” the person identifying himself as Tukuna Pradhan said. 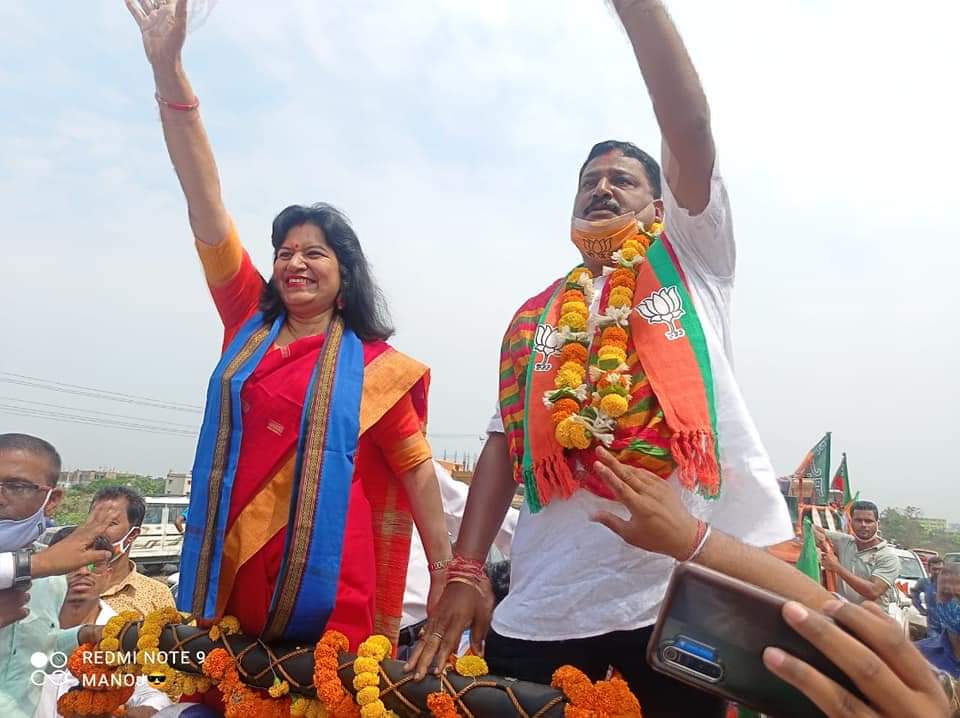 His observation was not quite off the mark considering that the Congress has gradually lost its support base in this constituency in Puri district. Traditionally, the fight was between the Congress and the Janata party nominees with the last few decades dominated by the Yudhistir Samantray versus Pradeep Maharathy battle. Though BJD’s Maharathy won seven of the last eight elections (Samantray won once in 1995), the Grand Old Party continued to have a strong presence till 2019 when its nominee Mangaraj finished a distant third. BJP’s Ashrit Pattanayak dramatically improved upon his performance five years ago when he contested as an Independent and polled over 72,000 votes to finish second behind Maharathy, who secured more than 88,000 votes.

The scenario this time too looks similar with the BJD and the BJP locked in a keen fight and the hitherto Congress supporters, realising the futility of voting for their party candidate, considering the possibility of voting for the ‘lesser enemy’. “We have been fighting the BJP at the national level and the BJD in the state. We have to ensure our bigger rival is defeated,” a local Congress leader reasoned, dropping hints at the way the Hand party followers are likely to go on April 17, the polling day. In 2019, the Congress got about 10,000 votes.

The indication came a few days ago when Samantray’s son showed up at Naveen Niwas here and, in an interview to a private news channel, hinted at his support for the ‘youth’ candidate (read Rudra Pratap). On Monday, Naveen spoke to Mangaraj’s brother and wished the Congress candidate a speedy recovery.

While the political realignments expected during a bypoll are taking place and the parties trading charges against each other, the BJD is not taking the BJP nominee Ashrit lightly. “He has support in certain pockets, especially the areas closer to Puri, while our presence is stronger in areas closer to Bhubaneswar,” noted a BJD leader, adding, “On the whole we have a stronger hold on the constituency, the sympathy factor is there for Rudra Pratap, who also has a youth appeal. People have faith in Naveen Patnaik. We are therefore trying hard to to increase the margin compared to 2019,” the leader said.

The BJP, on its part, is attempting hard to wrest the seat from the ruling party and put all its state leaders on the job. BJP’s national vice-president Baijayant Panda and national general secretary in-charge of Odisha D Purandeswari have also hit the campaign trail. Oil minister Dharmendra Pradhan is scheduled to campaign on Tuesday. “The people of Pipili-Delang want paribartan (change). They want the area to be free of violence and hooliganism and wish to see development,” Ashrit said, hoping he will be third time lucky.