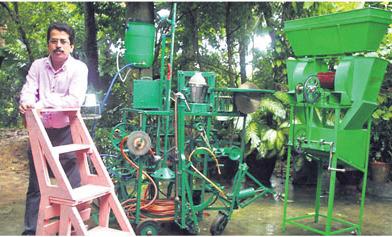 Balasore: A young engineer of Balasore district found a place in Limca Book of Records for his innovations to popularise science among common people by inventing more than 10,000 social utility items.

Dr Panda said he had applied for the Limca Book of Records about eight months back but has been researching and inventing new utilities since 2000.

In 2005, he had invented many alternate techniques of farming for the utility of farmers. Some of major innovations of Panda are Fan Generator, double face winnowing fan for farmers, dual face fan, farm storage bags, leaf cutting machines, electric colour brush, hand water pump, and many more.

He also presents lectures on scientific projects to students in different parts of the country as well as in overseas.

How did click with the students? Dr Panda says at the time of teaching, he tries to solve all the scientific problems in a simple way. “This effort helped me in inventing new scientific items and I have become a successful scientist,” said Panda.

He also set up ‘Social Development Research Organisation For Science, Technology and Implementation’ (SROSTI). Among his many recognitions, he was felicitated by Indian Science Congress in 2019.

“The success is the result of my 30 years of experience and dedication in research and inspiration from several organisations,” said Panda.

He termed his mother Sebati Panda and father late Ramakanta Panda as the inspiration behind his inventions.