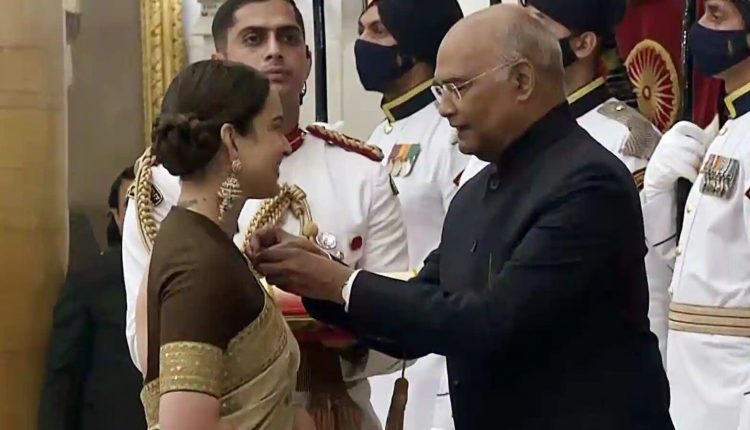 New Delhi: Most politicians across party lines seem to be unanimous in their demand for the government to take back the Padma Shri bestowed on actor Kangana Ranaut after her remark by describing India’s Independence in 1947 as ‘bheek’ or alms.

Ranaut claimed that India attained freedom only after 2014, when the Narendra Modi-led government came to power.

Senior Congress leader Anand Sharma: He termed the remarks “shocking and outrageous” and urged President Ram Nath Kovind to take back the Padma award given to Ranaut.

“Kangana Ranaut’s statement heaping insult on the courageous freedom fighters led by Mahatma Gandhi, Nehru and Sardar Patel but also belittling the sacrifices of revolutionaries like Sardar Bhagat Singh, Chandrashekar Azad and several others,” Anand Sharma said in a series of tweets.

“Psychiatric evaluation should be carried out before giving such awards so that such persons do not dishonour the nation and its heroes,” he said.

Tagging the President, Manjhi said, “The Padma Shri conferred upon Kangana Ranaut should be withdrawn forthwith. Else the world will think that Gandhi, Nehru, Patel, Bhagat Singh, Kalam, Mukherjee, Savarkarall had begged to get freedom.”

“She should be charged with sedition for her comments. Her Padma award should also be revoked,” the Shiv Sena leader said.

Maharashtra minister and NCP leader Nawab Malik: “She insulted freedom fighters. The Centre must take back Padma Shri from Kangana and arrest her. Looks like Kangana Ranaut took a heavy dose of malana cream (a particular variety of hashish that grows specifically in Himachal) before making such a statement.”

Aam Aadmi Party’s national executive member Preeti Sharma: She has submitted an application to Mumbai Police, demanding that a case be registered against Ranaut.

BJP Lok Sabha MP, Varun Gandhi: Sometimes an insult to Mahatma Gandhi’s sacrifice and penance, sometimes respect to his (Mahatma Gandhi’s) killer, and now an insult to the sacrifices of lakhs of freedom fighters — from Shaheed Mangal Pandey to Rani Laxmibai, Bhagat Singh, Chandrashekhar Azad, Netaji Subhash Chandra Bose and more. Should I call this madness or treason?” he tweeted.

Diabetics With COVID Likely To Have Fatigue Complications: Study