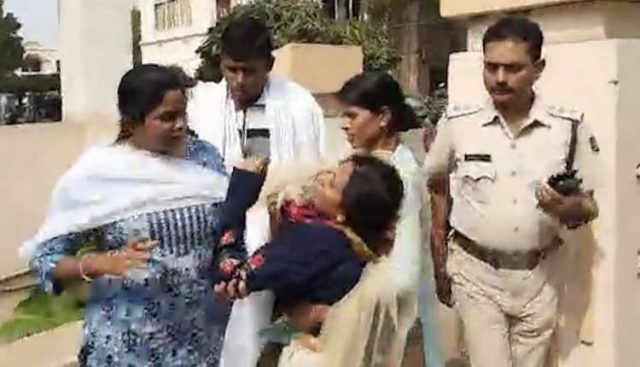 Cuttack: A woman allegedly attempted self immolation in front of Odisha DGP’s office in Cuttack on Wednesday by pouring kerosene on the body, accusing the police of being apathetic towards her complaint of blackmailing against a journalist.

The woman, who reportedly hails from Rajkanika area of Kendrapada district, was rescued by police personnel before she could take any further step, sources said.

Alleging that a TV channel journalist has been blackmailing her by threatening to make public her obscene videos and photos, she claimed that she had lodged several complaints with the police.

However, despite repeated requests for action on her complaint, police have  not taken any step against the journalist, the woman alleged.

She further alleged that the journalist, based in Pattamundai in Kendrapada, threatened to make her photos and videos public if she continued to approach the police for action against him.

Accusing the police of supporting and shielding the TV journalist, she alleged that she was threatened, harassed and even assaulted in presence of senior police officials.

Claiming that she had also approached top police officials seeking action, the woman said all her pleas went unheeded as the police has been ‘apathetic’ towards her complaint.

While senior police officials were not immediately available for comment, sources said investigation by the police is now underway and efforts are on to trace the accused journalist.

Doctor Leaves Towel Inside Woman’s Stomach In UP

Night Temp In Odisha To Drop By 3-5°C After 24 Hours, Fog To Lift From Friday