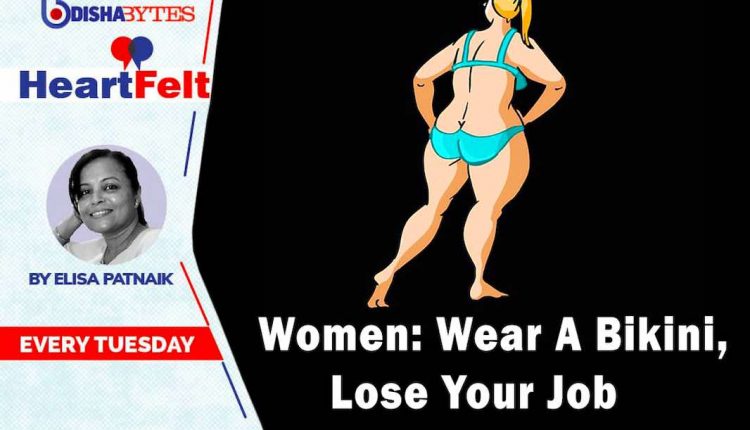 Can you lose your job for wearing a bikini and posting your photos on social media? Does your employment contract have a clause saying that you will not wear swimwear ever while in that particular job? Or even before joining the position, for that matter, if you take a particular case into account? Would a male employee have lost his job if he had posted his photos in swimwear?

Honestly, the recently revealed case of a former Assistant Professor at Xavier’s University, Kolkata, who was allegedly sacked for posting pictures in a swimsuit on her personal Instagram is too ridiculous and sexist to even warrant a decent response. In fact, everything about this case is questionable.

Not only was the former female teacher humiliated, harassed and rendered jobless but is also fighting a legal battle with the University which has filed a defamation case of Rs 99 crore against her. The Assistant Professor was apparently asked to quit her job after the father of a student complained that his son was looking at her swimwear-clad ‘vulgar’ photographs. She was even asked if her parents approved of her posts.

Rather than questioning the student and his father on the invasion of privacy and the duo’s access to the teacher’s private photos from a locked private social media account and its circulation, the authorities chose to sack the female teacher last October. Not even considering that her photos were uploaded before she joined the university. Not even when it is not legally wrong or against the rules of the institution for teachers to post photos in swimwear.

Instead, in a case of institutional misogyny, the woman was blatantly questioned and harassed on her choice of clothes and how her pictures could affect the students. As if she paraded in front of the students in her swimwear! The former faculty was warned with an FIR threat and was forced to resign without being given an opportunity to respond or explain. When she sent the University a legal letter seeking clarifications, they slapped her with a defamation suit along with a demand for an unconditional apology.

The incident also reveals how Indian parenting mollycoddles its boys. Instead of reprimanding his son for browsing personal photos of the teacher, the father of the 18-year-old chose to target the teacher. Apparently, the First Year student was caught by his father looking at the teacher’s ‘objectionable’ and ‘inappropriate’ photographs which “bordered on nudity.” As reported, the father in his complaint stated, “It is obscene, vulgar and improper for an 18-year-old student to see his professor dressed in scanty clothes exhibiting her body on a public platform,” while describing the swimwear-clad woman as akin to being dressed in ‘undergarments’ and being ‘shameful’ to upload the photos on social media. The female teacher even read out the letter sent and asked to explain herself. Interestingly, there are now questions raised on the veracity of the letter itself with the so-called guardian untraceable.

Although the Institution has refrained from commenting on the issue, thankfully, the outrage against this moral policing, intimidation and slut shaming among netizens, women activists, academics, and former and current students has at least shown that such deliberate sexism and harassment is unacceptable.

The aim of an academic institution is to create an enabling environment and foster critical thinking, not to debate the appropriateness of a female teacher’s clothing outside the institution, her personal choices and liberty that has not harmed anyone. Questioning  personal lives of faculty members and their choice of clothing is not only regressive and misogynist but also sets a precedent for such a trend in the future.

Unfortunately, the female professor is not the only one in this battle. In this sense, a woman’s body and her choice of clothes have always been subjects of intense scrutiny, harsh judgement and shaming in India and elsewhere.

In India, women wearing swimsuits, especially bikinis, are still considered to be bold, transgressional, sexually aggressive and non-conformists. Wearing a bikini in a public place is still considered an act amounting to crossing an unspoken social and cultural boundary or so-called Indian values. It’s like becoming one of ‘those women’ who are wild, too liberal, adopting traits of western female sexuality that the bikini implies.

A woman’s character and ability are often judged by what she wears. The implication is that women who were ‘provocative,’ ‘revealing’ clothes are asking for it, have themselves to blame and get sexually harassed. Women are always up for trial for wearing too many clothes, too little clothes, wrong clothes, and inappropriate clothes. Even women in the glamour industry – where sporting bold, modern and sexy clothes is somewhat acceptable – resist or avoid wearing bikinis in India. Those who are known to wear a bikini for their work subsequently end up doing bold scenes and item numbers.

Glamour industry, beach vacations and swimming pools apart, wearing a swimsuit for a woman, particularly a bikini is still a bone of contention. Women would rather wear T-shirts teamed with shorts or modest swimwear like a conservative leg suit with sleeves rather than a two-piece bikini and deal with uncomfortable questions, moral policing and harsh judgements about their character. How dare women wear something so skimpy and risqué a garment?

Swimwear apart, the fear of being judged by what one wears still looms large for many women, even within their own families. Random people and complete strangers are quick to rip you apart for your choice of clothes.

Nevertheless, since the last several years or so, Indian women are gradually letting their guards down and not letting conservative voices get in the way of their choices. Thanks to a diversity of affordable brands available on online stores, they now have the privacy, comfort and freedom to at least browse, choose and purchase swim wears. Even though it’s still a small group of women who may wear bikinis on holidays abroad or at beach resorts.

Debates around the choice and freedom of women to wear clothes, particularly swimwear is complex. Critics claim that by wearing a bikini, women by sexualising themselves reinforce the patriarchal norms of body objectification. They contend that this kind of sexualisation and objectification is driven and perpetuated by males and is largely involuntary, lacking an agency.

For me personally, the rational argument is to consider it as a choice of garment, functional too, maybe even to flaunt a well-toned and fit body or for the glamour quotient completely based on the comfort and freedom of the person herself.

The female body and the kind of clothes they wear have always been the subject of intense scrutiny and judgement. We are always taught to cover up, and be conscious of our clothes and what and how much it reveals. Female professionals who share pictures in swimwear, especially bikinis, are seen as unprofessional, unserious and irreverent. Even female athletes and sports persons do not have it easy either. But this practice continues despite protests and movements across the world to desexualise the female body and open choices and freedom for females.

The instinctive and immediate reaction to women’s clothing is worrying. We still continue to debate over women’s clothing and choice rather than respecting the choices women have made. So, between objectifying one’s body and conforming to patriarchal notions versus one’s personal freedom and choice and desexualisation of women’s bodies – how does one then relate wearing a bikini to identity?

Today, swimwear and bikinis are worn by women as an act of celebration of their bodies and also as an act of rebellion against the body shaming that they face for not conforming to conventional norms. Is this catering to the expected gender confirmations or having enough agency to make one’s decisions? The choice to wear or not to wear a bikini, or whether it is limiting or liberating depends on the informed choice and freedom of the people choosing to wear it – which in itself is feminist. But losing a job for wearing one, nah certainly unacceptable!