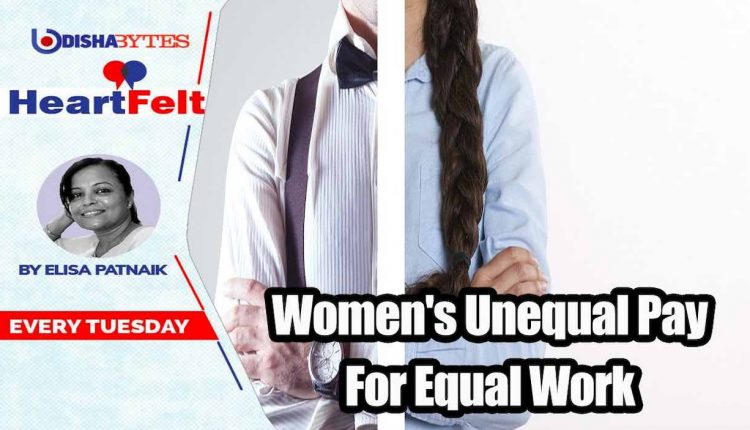 When the Board of Control for Cricket in India (BCCI) recently announced equal match fee for both female and male centrally-contracted players to promote gender equality by implementing a pay equity policy in the country’s most popular sport, it was indeed a reason for cheer.

The Indian women’s cricketers will now receive Rs 15 lakh per test match, Rs 6 lakh per ODI match, and Rs 3 lakh per T20I, the same as their male counterparts. Earlier, the women players received Rs 1 lakh each for ODIs and T20Is while the match fee for a Test match was Rs 4 lakh.

Though welcome, this pay parity comes after nearly 45 years of the establishment of the Indian women’s national cricket team in 1976. Earlier, even the lowest-paid male cricketer earned twice what the top women earned.

It’s not just sports, women continue to receive lesser pay or remuneration across sectors for the same kind of work. Women find themselves at a disadvantage as compared to their male counterparts even when they have the same qualifications, skills and experience. Although women workforce in most countries has been increasing, their entry into active economic life has hardly been matched by a corresponding improvement in their income and working conditions.

Unequal pay is the difference in remuneration offered to men and women for the same job, a serious concern for gender equity both in the country and outside. It not only causes income inequality between men and women but is also one of the main causes of gender disparity.

Worldwide, women only make 77 cents for every dollar earned by men resulting in a lifetime of income inequality between men and women with more women fading into poverty. According to UN Women, this ‘stubborn inequality’ in the average wages between men and women persists in all countries and across all sectors, because women’s work is undervalued and women tend to be concentrated in different jobs than men. According to the ILO, in every country, women continue to be paid less for comparable work than men, where women earn between 50% and 96% of men’s wages.

Even though the work done by women may require equal or more effort and skills, it’s valued and remunerated less. In addition, the so-called “motherhood penalty,” says UN Women, pushes women into the informal economy, casual and part-time work, and tends to be larger in developing countries than in developed countries. The #StopTheRobbery campaign by UN Women calls for equal pay and women’s economic empowerment as part of achieving full gender equality.

The low participation of women in the labour force along with pay disparity has been a continued obstacle. In developing countries, women make up only 31% of the formal labour force. Women who make up a greater percentage of workers in informal and unorganised employment are often at the receiving end of discrimination and exploitation. They often face discrimination and are rarely able to rely on an organization to protect their rights. Moreover, the problem is compounded when in sectors like agriculture, women are consistently paid significantly less than men for the same kind of work.

One reason why the income disparity continues is also due to the absence of women in top and leadership positions. Men continue to dominate the highest corporate and institutional positions across the world. The ILO estimates that, at the present rate of progress worldwide, it would take 475 years for parity to be achieved between men and women in top-level managerial and administrative positions.

The annual  Global Gender Gap Report (GGGR) is an instrument used by the World Economic Forum (WEF) to highlight the position of different countries on gender parity in comparison to their positions in the previous year. India ranks 135 among 146 countries in the GGGR published in July 2022. In comparison to the year before, when India ranked 140 out of 156, it has slightly improved its position. In the economic participation and opportunity category, however, India is placed at 143 among 146 countries.

There is no dearth of evidence to illustrate this inequality. According to the World Inequality Report 2022, men in India earn 82% of the labour income whereas women get only 18%.

The Monster Salary Index (MSI) published in 2019 also reiterates the inequality and states that women in the country earn 19% less than men. The survey revealed that while the median gross hourly salary for men in India in 2018 was Rs 242.49 it was Rs 196.3 for women. The gender pay gap was seen across key industries and was found to be high in jobs that require higher skill levels. The gap also widened with years of experience. While IT services showed a pay gap of 26% in favour of men, in the manufacturing sector, men earn 24% more than women.

Obviously, the gender pay gap is not limited to any particular strata. It is present across sectors, with different kinds of manifestations. The entertainment industry for example displays massive gender disparity in terms of wages. A-list actresses get paid only 40-45% of what their male counterparts make with male stars still considered greater and more bankable.

So, while women may be earning more consistently, the space for negotiations in their favour and the number of women who actually qualify for higher promotions with better pay packages is limited. Women’s restricted access to resources makes it even harder for them along with issues of non-inclusivity and sexual harassment at the workplace which further compel them to opt out of their careers due to a lack of gender-sensitive employment policies and practices.

Even as several industry frontrunners are promoting equal pay policies or are proactively working on removing the disparity, unequal pay still remains one of the toughest challenges for women. And importantly, until and unless the overall discrimination against women in the workforce and elsewhere is not tackled it will continue to remain so.