Wrestlers’ Protest: Talk With Minister Inconclusive, WFI President To Address Media At Noon Today In UP 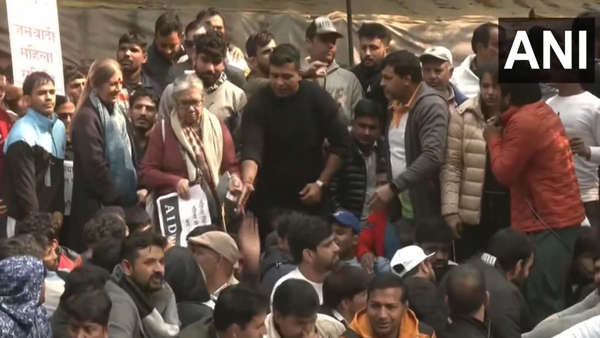 New Delhi: Wrestling Federation of India (WFI) president Brij Bhushan Sharan Singh will address the media around noon today from Uttar Pradesh’s Gonda. He reached his Nawabganj residence late last night, via road from Delhi. A meeting of the federation is expected to take place in Ayodhya on January 22. A decision on resignation will be taken post that meeting, according to media reports.

The protesting wrestlers have been called to meet Union Sports Minister Anurag Thakur at 8 am again as late night’s meeting remained inconclusive as they refused to back down from their demand that the government immediately disband WFI. Wrestlers Vinesh Phogat, Sakshi Malik, Bajrang Punia and several other sportsmen will continue their protest against Brij Bhushan Sharan Singh at Jantar Mantar on Friday, marking day three of the stir.

Ace India wrestler Bajrang Punia on Thursday said wrestlers have “proof” of the allegations levelled against the Wrestling Federation of India and its chief and demanded that the body should be dissolved. “The WFI president stated that he will hang himself if the sexual harassment allegations are found to be true. Earlier there were just two girls who had come forward but now 5-6 girls have raised their voices and that too along with the proof. We are not making bogus claims,” Punia said.

The WFI is yet to submit a response to the Sports Ministry, which has sought an explanation over the wrestlers’ allegations. The ministry cannot force Brij Bhushan to resign unless it receives a written reply since the government itself had asked the WFI for an explanation. Former wrestler and BJP leader Babita Phogat was also part of the meeting.

Meanwhile, several Khaps in Haryana, including the Phogat Khap, also voiced support for the grapplers. A ‘Sarv Jatiya Khap Mahapanchayat’ was held in Charkhi Dadri on Thursday. The meeting “felt that the allegations levelled are serious, therefore, the entire matter should be probed by a retired judge, and the WFI chief should be sacked and further action as per law should be initiated.” The Khaps also mulled on marching to Delhi where the wrestlers are holding their protest.

Indian Army: 108 Women Officers To Be Promoted To Rank Of Colonel For Command Role