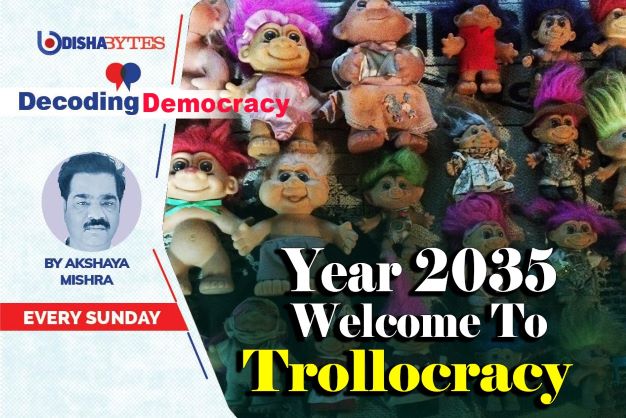 (As trolls of the virtual universe seek to take over our real one, it’s time to ponder to what the trend might lead us to. Here’s an imagined account of India of 2035 where trolls have taken control of our world and lives, and redefined democracy in their own unique way)

Trollocracy. Some call it the anarchist’s utopia. A few would prefer the word dystopia. But everything in the universe is a matter of perception, isn’t it? Actually it’s democracy, post-modern and much closer to the original definition of the idea: of, for and by the people. In this world, people and trolls are interchangeable, because they switch roles depending on convenience.

Trolls have gone far beyond the days when they warned actor Vijay Sethupathi against playing the role of Sri Lankan spin legend Muthiah Muralitharan or issued rape threats to a famous Indian cricketer’s five-year old daughter or forced a powerful company to withdraw an advertisement depicting communal harmony or demanded boycott of movies. Those were nascent days of trollism. The virtual was not fully real yet. It had marked its impressive presence, but didn’t quite know how to transform into something bigger.

Small experiments were carried on television by cunning trolls who masqueraded as journalists. They declared innocent persons guilty, indulged in theatrics to whip up frenzy and gauged how many among the audience had bitten the bait, hence ready to be enrolled for collective action in the future. Others like them patrolled the social media with an invisible yet omnipresent police force armed only with venom and a vicious vocabulary. They thrashed into order everything out of place. It was somewhat like a pilot project, limited in scale but high on ambition. And it was successful. Trollocracy was ready to take off. A decade-and-a-half on, it is a reality.

Trollism took time to develop its contours, but when it did it was the simplest and purest of all isms that were experimented by the humankind earlier. Human beings, it held, were products of feelings. Their likes and dislikes, key decisions, social behaviour and interactions were guided by these. Anger, envy, hatred, the complex of inferiority and selfishness among others were primary feelings, as natural to people as hunger and thirst. Those such as sympathy, empathy, respect, caring and love were pseudo-feelings drilled into people through flawed socialisation and education. To be true to oneself meant to give precedence and release to the most basic of emotions. The person who sought to suppress these was a fake.

Trollism believed in self-expression, while other isms advocated self-restraint. Happiness, it believed, is proportional to the freedom of expression one enjoys. The latter is one of the fundamental principles of democracy, but it lost way somewhere. As the most refined version of democracy, trollism had made amends. Now, people could express themselves any which way they wanted without worrying about consequences. It was not limited to views only, it could be in the form of physical actions too. Anger or hatred, for example, could be expressed in direct acts of violence.

Since freedom without chains was central to its ideology, it was necessary for trollism to dismantle the infrastructure that forced restraint on people. In 2035, courts exist but their orders are not worth the paper they are written on. Any television anchor or sundry journalist — all of them are trolls now — could rip unacceptable court verdicts apart and pronounce their own instead. The police exist, but they are largely ornamental. They are in sync with the feelings of trolls and shoot down people to win applause of the latter. Laws and rules are flexible to the point of non-existent now as they are subject to public approval and open to change anytime. As a form of punishment, beheadings at public places is getting popular.

School and college education is revamped to make intellect an inferior human faculty. The more one studies the stupider one gets and more education means more distance from the masses — this was one important finding in a study of 2020 that looked into the attitude of educated people, bureaucrats and technocrats in particular, towards ordinary people. The latest education policy, which just won a referendum, discourages study of humanities and analytical thinking. Both load the brain with polemical garbage and stunt the normal feeling-oriented growth of the human mind, its votaries argue.

There’s a popular demand to declare IQ of 70-80 as national average intelligence. Children above it would be treated as mentally challenged and taken care of in special homes. All creative activities including cinema, theatre, literature, fine arts etc, which in any case have stopped being creative, would have to be mindful of the national IQ. The success of all such work would be decided on troll votes. It follows the same referendum model that has been nationally accepted as the fairest of all models. It eliminates the role of experts. They could be obnoxious with their knowledge of the subject.

In this beautiful, just world, dissent does not exist, neither does the other view. In the yes-saying eco-system, political leaders have lost relevance. The political party which was rumoured to have encouraged trolls and given a fillip to trollism lost the initial advantage after all political rivals began worshipping them. It began some years ago. The more politicians ceded space the more powerful trolls became. The electoral process threw up confusing results. For some reason, lead actors in B-grade movies mouthing cheesy dialogues get elected in large numbers. But it doesn’t matter now since trolls run everything from diplomacy to farm policy to everything conceivable.

Meanwhile, the economy has collapsed beyond repair, neighbouring countries have occupied large chunks of our country’s land, and life, in general, is miserable. Yet the troll media cannot stop painting a rosy picture of the motherland, which they claim is a global superpower now, overflowing with milk and honey. One anchor cites an in-house survey, with a huge sample size of 17, saying Indians are the happiest people in the galaxy. As the happy news circulates, the faces of millions of tramps on the streets — most reduced to the status in recent years — light up in delirious joy. The great country of yore has finally found its place in the sun. They pull out their mobile phones — the only thing they refuse to let go of besides data service — and type out words of approval. The survey goes viral riding on thumbs-up emojis, and thus becomes the truth. Most of the tramps are part of the troll force that run the country.

They are, like the McDonald advertisement for its pizza goes, loving it. Feelings and the liberty to express them with no inhibition or control make a unique experience, a never-before in human history. Anarchist’s paradise or dystopia is only a matter of subjective interpretation. Happiness is what counts in the end.

The Silence Of The Sounds