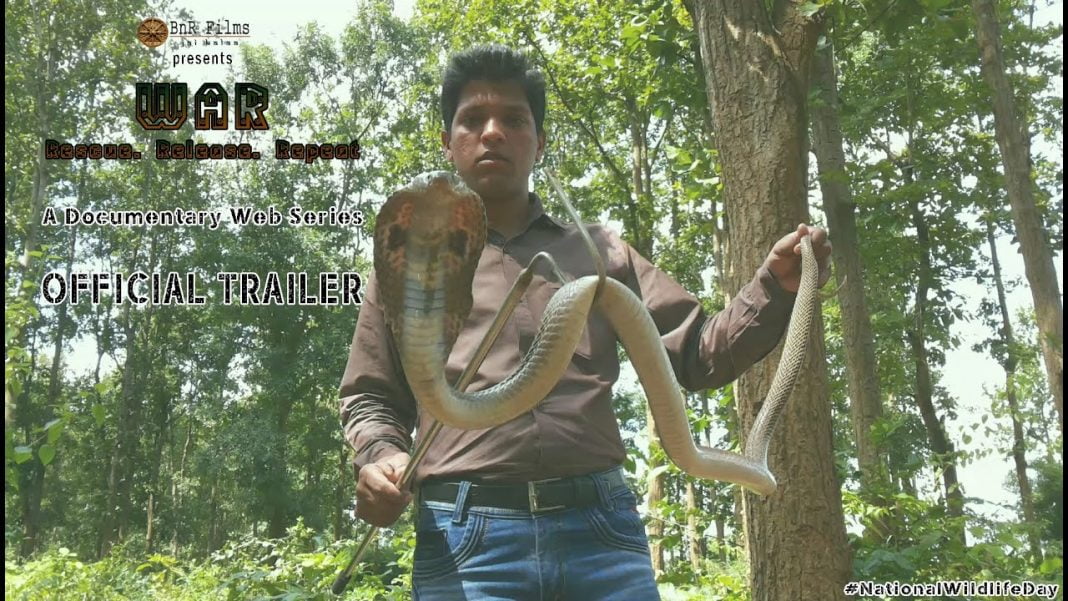 Jeypore/Pune: Bringing to the fore an awe-inspiring story of youngsters in a quaint corner of Koraput’s rich biodiversity park, where hunting and poaching has led to a huge loss in fauna of late, award-winning film studio ‘BnR Films’ has come up with a web series called, ‘WAR: Rescue. Release. Repeat.’ Appropriately, the trailer was released on Tuesday, observed as National Wildlife Day.

WAR TEAM has donned the cap of a hero to save wildlife and the environment from getting exploited in Koraput. WAR TEAM stands for ‘Wild Animal Rescue Team on Environmental Awareness and Management. It was started by a young LLB graduate, Krishna Keshaba Sadangi in 2011 because of his infinite love for the wild. Other active members of the group include Susil Nayak, Rabi, Jaga Jena and Tusar Patra.

Within a span of seven years, the team has rescued more than 6000 snakes, 200 mammals and 600 birds and the numbers continue to grow.

The effort of this team inspired filmmaker Biswanath Rath to make a web series. “It is commendable how the group is creating awareness for the conservation of wildlife and endangered species. I took the opportunity to spread the word,” said Rath.

He says Jeypore, being his hometown, spotting different species of snakes was a common childhood activity. “Apart from snakes, especially Cobras, we are fortunate to have seen so many other wild animals like elephants, deer, bears, tigers and a variety of birds and plants. We take pride in belonging to Koraput, which is home to such a wide variety of flora and fauna,” Rath added.

However, with time, deforestation has become a bane and killing animals is an everyday affair putting the biodiversity of this district in grave danger, Rath said.

“I am scared that if this continues, the next generation will only find all these species in books. More importantly, the ecology of the entire region will face an imbalance, too difficult to restore,” Rath said.

WAR TEAM also conducts awareness programmes on the importance of wildlife conservation. This is now a global issue and their work deserves global recognition, believes Rath.

“One must be aware of SDG 15 or ‘Life on Land’, which is one of the 17 sustainable developments goals defined by the United Nations. It urges people to increase global support for the fight against poaching and trafficking of protected species (animals, birds, mammals) and to promote the sustainable management of all types of forests to put an end to deforestation,” Rath said.

The series, he added, is a tribute to their indomitable spirit. “My heartfelt thanks to Krishna and all the other members of the team for their constant support and cooperation for the series. I would also like to thank our producers Prasant Rath, Pramod Kumar Rath and Archana Rath for their support,” he said.

“It was challenging as we came across many venomous snakes and dangerous animals while taking shots. The response to the trailer is overwhelming and thoroughly encouraging,” Rath said.

The first episode of the series will be released on October 1 to mark the ‘World Wildlife Week’ (October 2-9).

‘No Formalin’ Found In Fish From Andhra Pradesh: Maharathy