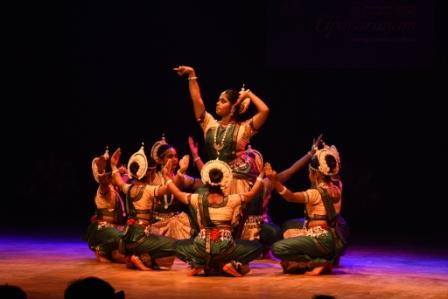 Bhubaneswar: Young artistes of Srjan had audience glued to their seats with deft footwork, neat mudras and perfect postures at Rabindra Mandap here on Tuesday.
The festival ‘Upasaranam’, which means moving on the path of excellence, was organized to discover new talents in Odissi and creating an opportunity for them to perform on a major platform.
Mangalacharan (Ganesha Bandana) set the tone for the evening. The starting piece was choreographed by Guru Ratikanta Mohapatra and the music was by Pandit Hariprasad Chourasia.
The next performance was Pallavi set to Raag Vasant. A composition of Guru Kelucharan Mohapatra, it had music by Pandit Bhubaneswar Mishra.
The young artistes then presented Mahadev set to Raag Malika. This musical composition by Debasish Sarkar too was choreographed by Guru Ratikanta Mohapatra.
This was followed by another Pallavi set to Raag Megh and Swagatam Krishna set in Raag Mohana, both dances composed by Guru Ratikanta Mohapatra.
Nrutya Aabhinya Vande Mataram set to Raag Desh brought the curtains down. The original music was composed by Jadunath Bhattacharya and dance choreographed by Guru Kelucharan Mohapatra.
Among others, eminent writer Pratibha Ray, Ashok Kumar Tripathy, Guru Lakshmikant Palit, Guru Satchidananda Das and director, Srjan, Guru Ratikanta Mohapatra were present.