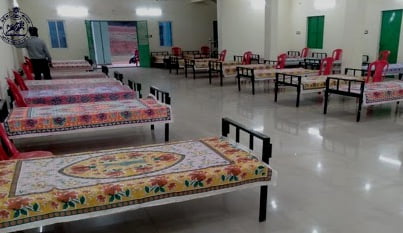 Bhubaneswar: Ten Home Guards of Jaanla outpost under the jurisdiction of Jatni police limits are being kept at an institutional quarantine centre. They had come in contact with a truck driver of Maharashtra, who recently died in a road accident and had tested positive for coronavirus.

According to the IIC of Jatni Police Station, Biswaranjan Sahoo, the truck driver had died in a road accident near Jaanla some days back. Since he was a native of Maharashtra, his blood and swab samples were sent to AIIMS-Bhubaneswar for tests and the report revealed that he was corona positive.

“The 10 home guards of Jaanla Police Station had taken the driver to the hospital. Eight among have been shifted to a government quarantine centre while two who had close physical contact with the driver, are being kept in an isolation ward,” the IIC added.

Bride On Dharna: Odisha Court Asks Couple To Live In Rented House For A Week