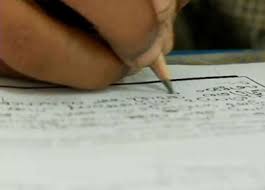 Age is no bar to education. A 105-year-old woman from Kerala recently appeared for the fourth standard equivalency examination carried out by the state literacy mission.

Bhageerathi Amma always wanted to study, but had to give up her dreams and care for younger siblings after her mother passed away. As fate would have it, she became a widow in her 30’s and had to solely shoulder the responsibility of bringing up her six children.

But the zeal to educate herself never really died in her. The centurion sat for the fourth standard exam at her home in Kollam, becoming the oldest ‘equivalency learner’ under the Kerala State Literacy Mission, Hush Post reported.

The Mission resource person, Vasanth Kumar, said Bhageerathi Amma had difficulty in writing and took three days to complete the three question papers on environment, maths and Malayalam. He was helped by her youngest daughter.

Kumar said Amma was very happy to appear for the examination and excited as she had left her formal education at the age of nine when she was in Class 3. “Even at this age, she has a sharp memory, has no problems relating to eyesight and sings well,” he added.

One of her six children and three of her 15 grandchildren are no more. The woman has 12 grand and great-grandchildren.