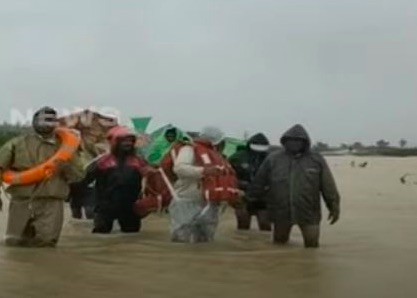 Bhubaneswar:  Twelve labourers engaged in construction work of a bridge were rescued by fire service personnel after they got trapped in gushing water in Odisha’s Nabarangpur district, battered by heavy downpour for the last couple of days.

The district administration swung into action after receiving information about the incident in Kasagumuda area on Monday, official sources said.

Following instruction from the administration, fire service personnel from Nabarangpur and Kosagumuda rushed to the spot and carried out a rescue operation. “All the 12 workers. were rescued and taken to a safe place,” they said.

The incident took place when the workers, engaged in the construction of the bridge over the Indravati river near Chirma, were inside a temporary tin-roofed structure near the site and the entire area was flooded by water following incessant rainfall. The water level in the river was also rising in an alarming way, they said.

Fearing danger to their lives, the workers shifted to another place near the under-construction bridge. However, they were soon trapped in the gushing water before being rescued by the fire service personnel who carried out a well-planned operation to bring the stranded workers to a safe location.

Sources said Nabarangpur district was pounded by heavy to very heavy downpour for the past four days and Kosagumuda recorded 145 mm rainfall on the day. Areas such as Umerkote, Jharigaon, Raighar and Dabugaon also received heavy rainfall.

The district administration has taken all necessary precautionary measures to deal with any situation including flash floods or mishaps as the IMD has forecast that heavy rainfall will continue for more days.